My new glow- NARS' The Multiple in G-spot

This would be my second color from NARS after using the same blush in Orgasm for more than 5-6 years which I got off ebay before Nars sold at Holts in Montreal? Yea, I know, gross. I should have thrown it out after 12 months as suggested by the company but who does that? For me, my make up can last me forever. I don't think I ever finished a tube of anything. I'm actually still not finished with my blush and probably have more than half of the content left but it's time to let it go. It's not like I have other blushes I alternate with since this is my ONLY blush and I use it every time i make an effort to put on some make up. You just don't need much of it in the first place I guess for that natural flush glow.

I decided to get G-spot because I read about how amazing it looks on darker skins and not too shimmery and just a bit darker than Orgasm.

Although I love Orgasm (!! dirty), it's been more than 6 years I've had it and I wanted to absolutely try something different. The Multiple can be used for your eyes, body, lips and wherever you want some shimmery pink goodness which I don't really care for. If they had a blush compact in G-spot, I'd get that instead but they didn't.

Bonus: I paid for this (retail $39USD) with an Amazon gift card I got from exchanging points accumulated on my credit card. Free!

Yea, it wouldn't be right for me to wear such a famed expensivo watch right now however, if I got this watch, it should last me a lifetime right? Can it be a heirloom-18K gold? Will the leather strap even survive the test of time or abuse by me? I'm pretty rough with my stuff ..expensive or not. Just ask my iPhone. But at this price, it should magically ward off scratches, damages, thieves...for life!

If it's something I'm going to wear daily from day to night, I must love it! So I've decided not to settle for less and just wait, wait for the right time to get the right watch and be..on time (teehee)! I really do not like taking my phone out 100 times a day to check on the time as I constantly need to work on experiments, attend seminars or meetings. Even though many people I know don't own watches, it's just good to have one n'est ce pas?

A couple of years ago, I picked a Seiko watch vaguely similar to this style but it did not survive longer than two years which is expected for a watch that cost me (my mom) less than $100? Before that, I hadn't had a watch since early high school because I was particularly picky about what I'm going to put on my wrist on a daily basis. I almost purchased a TAG Heuer watch but couldn't find the exact model and style I wanted and waited season after season for them and then just gave up.. and now, I don't think TAG suits me anymore. The models I was looking at averaged under $1300-$1500 which is still a substantial amount for a watch.

For now, the Cartier Tank watch is nice to look at and for me to dream about finding a $9000 "bill" to buy this $8900 watch. It's so simple and a casual classic. Look how beautifully it is worm by Jackie O and Angelina Jolie..it also helps that they are sophisticated confident women as well. 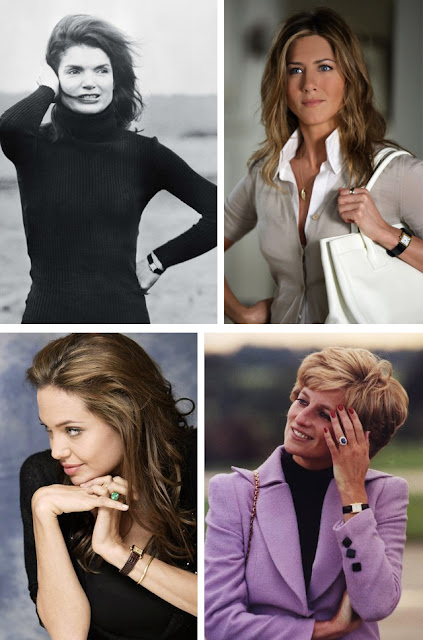 Hangin' in Williamsburg on the first week of Spring 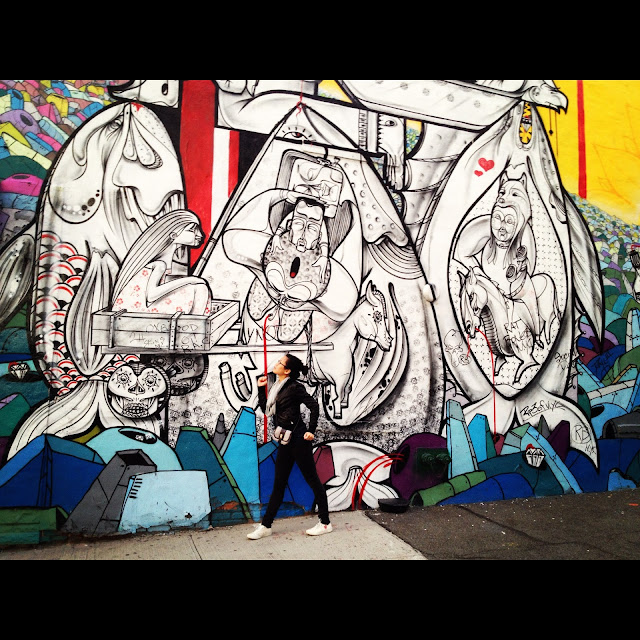 Here I am hangin' in front of a big mural somewhere near Williamsburg bridge with my new bag I got from Of a Kind...It's so small that I can fit only the essentials but the perfect size because it is the total opposite of the huge bag I usually carry around which can hold a big fat baby pig if I wanted to. ..It sure weighs like one sometimes because I like to put a lot of things in it. 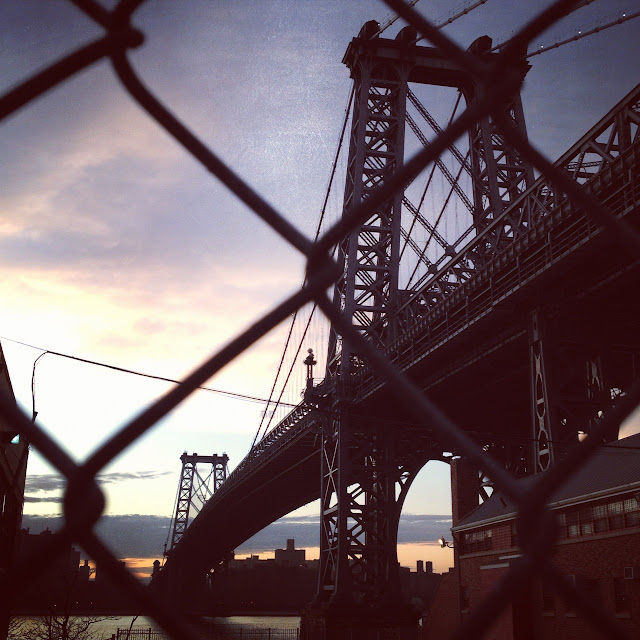 Stare at the cotton candy and how fast it melts under the heat of the Espresso..OR look at my sister's priceless facial expression.

Spring is in the air..color in the wear!

These are two new pieces I bought in Taiwan.
Dont you wuv the colors? I am determined to wear brighter colors this season...wearing black black black is so tempting and easy in NY. 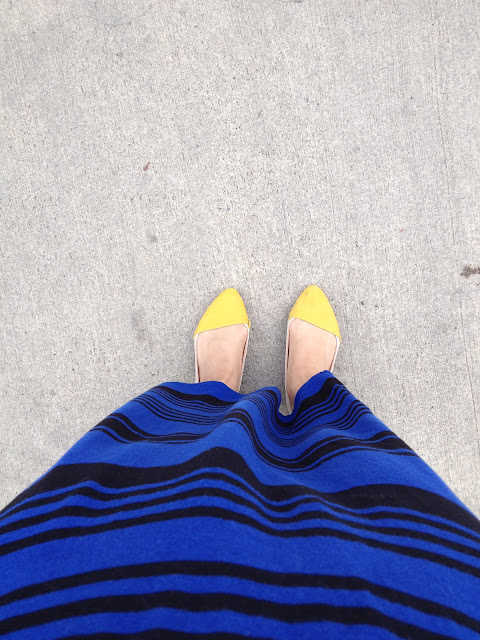 Taiwan night markets are like H&M but better because there is no tax.

Living in NY means..spending the price for a pair of shoes to have your coats dry cleaned. 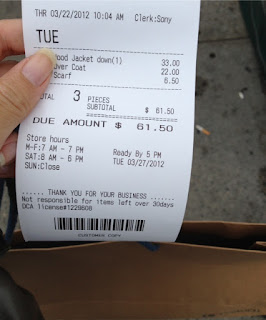 I am dry cleaning all my winter coats that I cannot do myself at home. This is the price for 2 coats (down and wool) and a cashmere scarf. I have another wool coat + a wool/cashmere scarf I want to wash but have put off because I couldn't carry everything. It will cost me $90 to dry clean everything. That's more than all the clothes I bought from my Taiwan trip!

My phone which also serves as my alarm clock died overnight because I didn't close the apps and my phone was half charged before going to bed therefore, my alarm did not go off and I woke up an hour past the beginning of the Diptyque sale. That's how the day started. I was contemplating going because I was late for work and also knew that all the good stuff were probably already picked through. So I quickly scan RackedNY blog and lineblogging mentioned a long wait and line. I still wanted to go and take my chance of showing up with low stock. My mind was set that the crowd will be gone soon because of the rain and there will be plenty of stock left so I should definitely go. All I wanted was ONE candle! I arrive almost two hours past start of the sale and saw a line outside. Dread.


When i entered the little sale space and at a glance, I knew the good stuff were taken ....empty space were candles were stacked high were empty and only two scent of candles no one wanted were left along with holiday candles which were the Spruce and vanilla plum fig whatever. Those were overstocked (on multiple tables) so plenty to pick from. But I'm happy that Baies and the other good stuff weren't there or else I would regret not coming earlier (stupid battery draining smart phones)..what was I thinking anyway, those were best sellers and would probably never end up at samples sale right? Right?! 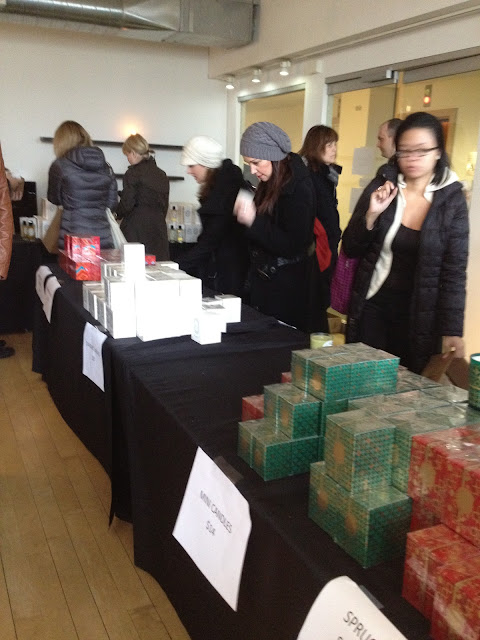 They lied. They did do some restocking but only of the holiday candles from what I saw. What ran out were the mini coffrets which I got my hand on of the last two on the table (yay or else it would have been a disapointing morning), the body lotions were all gone and a couple of the colognes. There were plenty of perfume, body gels, roll on perfumes etc. all at more than 50% off. 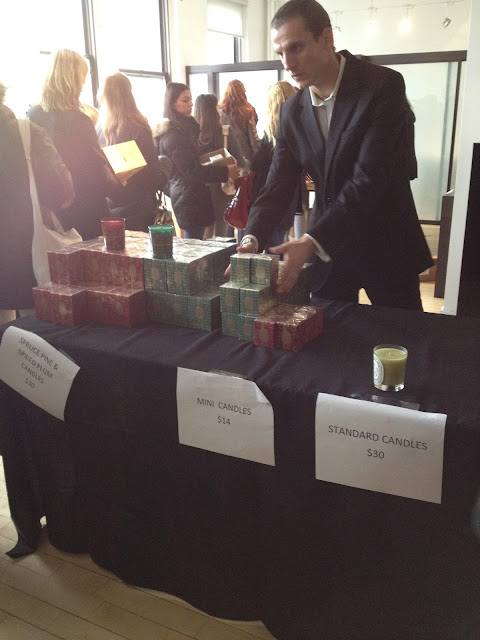 Many people had box full of stuff...mini candles were $14 so this guy bought probably 20 of them on top of pretty much everything else that was at the sale.


Apparently the sale closed due to the large amount of crowd that were drawn to the sale so they shut down the rest of the afternoon and will re-open tomorrow. Can you believe how many people love Diptyque? Are they all like me? Never bought Diptyque before but still crazy enough to stand in line in the rain and cold for the sale?