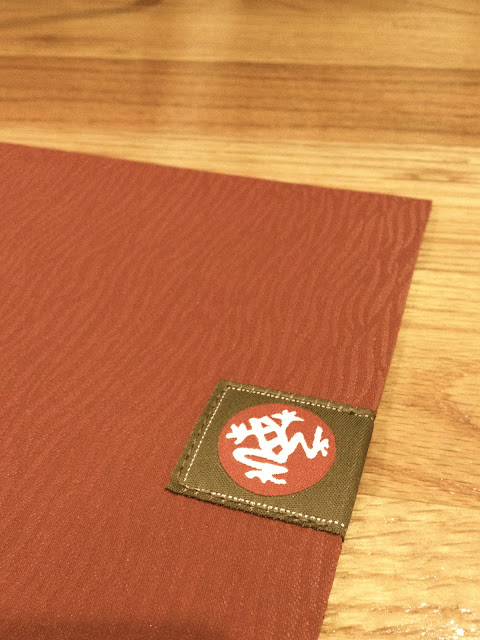 This is the first yoga mat I have ever bought! Are you surprised?! For those who know me, I have been doing yoga (intermittently because I'm lazy) for almost 4 years now but I can't even touch my toes without bending my knees yet so I'm no master yogi for sho'.

My first* yoga class was a hot yoga class taken at Taipei's Pure Yoga when I lived there before moving to NY. A friend brought me to try out free classes with her and she was confident that I'd be okay doing an intermediate class due to my background in dance. It was a sweat fest and brutal but I did well. I don't think I loved the class but I did like the feeling I got after it. In fact, I don't really enjoy practicing yoga as much as I enjoy the healthy feeling I get after class. Despite it, yoga was good for me and since I had no other form of physical activity during my unemployed state, I end up signing up for one year and taking only one class per week.


One class per week is not a lot so for a short while, I also took beginner's yoga class offered by a teacher from Manna yoga at a studio in our condo building. These small classes were useful and taught me the fundamentals of each pose and the proper way to do them. At Pure Yoga, since there are so many students per class, the teachers do not take the time to correct each student so I probably did not benefit from each class. The owner of Manna yoga is named LuLu and she is a pretty well known television figure as she appears on many Taiwanese shows promoting the benefits of yoga. She happens to live in the same condo complex as me and offered the condo community weekly classes at a cheapo rate compared to what she charges at her studio. Cheapo rate? Unemployed? I'm there.

So yes, you would think after so many years of yoga, I'd have my own mat by now. Pure Yoga offered communal mats on the spot and when I took classes outside of Pure, I just took an unused one from my parents. They don't do yoga but they have a bunch of mats at home because a friend of my dad's who makes these non-PVC mats in these distracting psychedelic tie dye colors gifted my parents with a couple of mats. I was happy with my mat and didn't feel the need to buy one because I didn't do that much yoga anyway. The problem with the mat or mainly my problem, is how sweaty my palms and feet get when I exercise or just thinking about them makes them sweat (Yes, I can make my hands sweat on command). I always slip and slide on the mat throughout my practice and cannot do a class without a towel(s). It is so annoying because I constantly have to place the towel around the mat or wipe my feet and hands.  Downward Dog is a no-go without them as my sweaty hands never let me hold the position quite right. Needless to say, I always needed a sweat absorbing slip-resistant mat.

I have never heard about Manduka until I saw it on flash sale on Rue Lala. I thought before buying it, I should read about Manduka and found out how a couple of yogi teacher together put years of work into making the perfect mat so it must be some serious stuff. I got the originally $46 mat on sale for $29.90 but with sales taxes and shipping, it came out to be almost the same as the original price which is fine. Some of the Manduka mats are over $100, I wonder why they are so expensive! The more expensive ones seem thicker, maybe longer and backed up with a lifetime guarantee. So I suppose for $100 you get a lifetime of mats! Now I am actually worried that because they are biodegradable, they will eventually start breaking down on its own where my sweat would be the catalyst! Mine is second cheapest of their mats collection and does not come with this wondrous lifetime guarantee business.

The Manduka Eko lite is not as light as I would have hoped but it seems stirdy and very grippy and I cannot wait to try it this weekend. I don't really care if it's portable or not because I only need to bring it downstairs to go to class.

Most excited about this feature: "Dual Function Cushion (Bottom Layer): Thicker, open-cell bottom layer provides lightweight cushion. It can also be reversed to function as the top surface for more traction. Just flip over for a sweatier practice!"

Some other specs about my mat: • 100% Biodegradable • Made from non-Amazon harvested, natural tree rubber • Most durable, eco friendly yoga mats available today • Developed over 3 years by yoga teachers and research from top yoga mat reviews • A natural yoga mat with no PVC or toxic plasticizers.


My old mat which D will use now. I love that he doesn't care it's pink but most probably because he doesn't want to pay $2 to rent a mat each class or feel the need to buy a new mat same as how I felt back in Taiwan.

I now only do one Vinyasa yoga class per week (if I'm NOT lazy) at Sapere Studios in Williamsburg. There's a Pure Yoga in NY which I tried out but I didn't want to invest $150 per month on a membership because I knew that I was going to skip so many classes and then drag myself to go out only out of guilt. I know..I had a gym membership and hated it.

Update August 2017: Reviews.com tried out 30 mats and this one came in as one of their top 10 mats! Check out the review here:  http://www.reviews.com/best-yoga-mat/