This weekend was neither too hot, too cold but juuust right with some drizzle of rain to cool things off when it got too hot.
We were craving quite some things on Sunday and left the comfort of Brooklyn to run some errands and grab some food at the same time.

I love Nolita and all those little shops on Elizabeth St! It is an ever-changing scene! 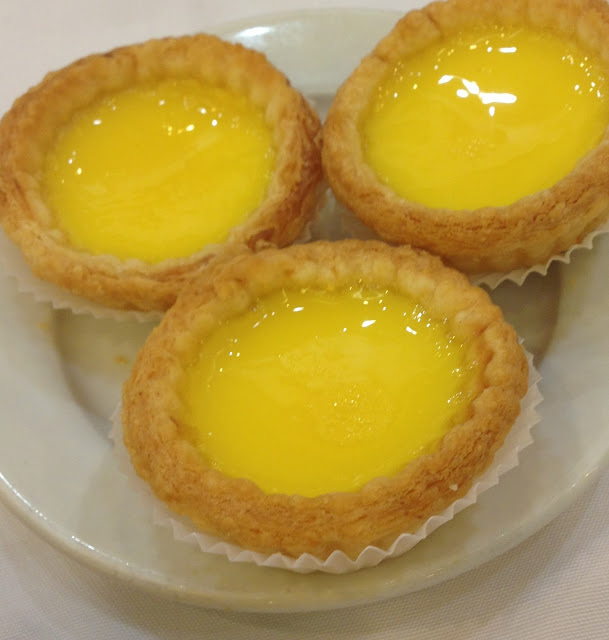 Craved some dim sum..this was just the start.
We had 2 more plates of shrimp rolls, veggies wrapped in bean curd, egg tarts..

D was craving some Mac N Cheese like a preggo woman.An hour after dim sum, we snacked on four cheeses mac and cheese at Macbar on Spring St.We evaded some heavy rain while pigging out so perks for that!

If you're ever in Nolita on Elizabeth street, please stop by 'Love Adorned' for the most unique variety of home decor and jewelries made by local NY designers or independent brands. The jewelries are a mix of everything. Some are delicate and fragile while others were rough and very avant-garde. 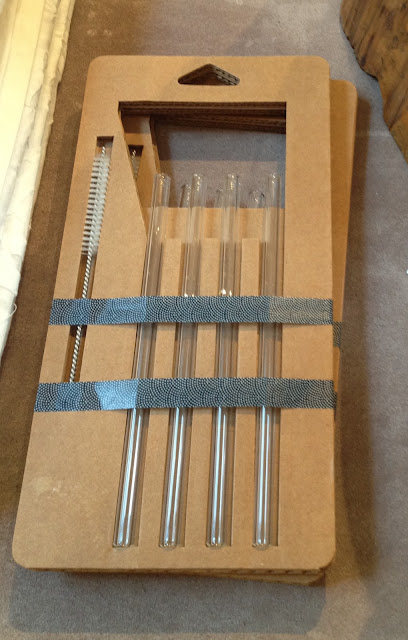 Would you use glass straws to save the environment? 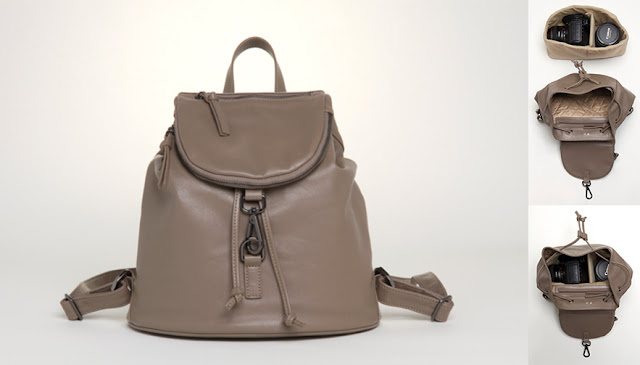 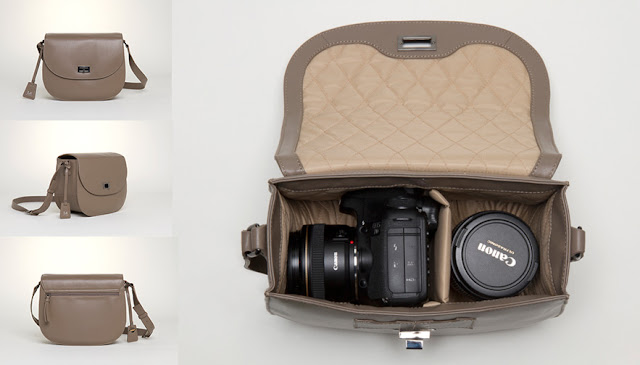 The Melrose seems more practical as you can use it as a backpack AND a camera bag however, the Claremont is more lady like and prettier to carry around. The only small problem I see is that I don't think I see any extra space to carry other personal items such as wallet, keys and cellphones which would then oblige me to carry another purse to carry around those things when I'm out shooting?

I like them both. I like the taupe color a lot too! I think Lo&Sons have answered to the calls of thousands of girly photographers out there! Thank you! Did you see their travel bags too?

I admit that I would carry my DSLR around more often if it wasn't so bulky and heavy.I know I'm not the only one that opts using the iphone as a camera but really would rather take better pictures with an SLR. If I do decide on bringing out the SLR, I trick my bf into carrying orrr I usually wrap it in a scarf and plop it in the the deep dangerous abyss of my large purse. It never really stays in the warmth of my scarf as my bag moves around too much. Banging and scratching around but mostly, losing the lens cap which can be disastrous for the lens.

We bought a Lowepro sling back bag which I think is the easiest way to carry an SLR camera but it's only acceptable if we're traveling as tourists but not when we're just strolling around in Manhattan.

I'd love to get one of these ingenious bags from Lo and Sons but now I have to figure out which one to choose (of course!).

Pictures taken from Lo and Sons.
Posted by Keiko at 9:21 PM No comments: 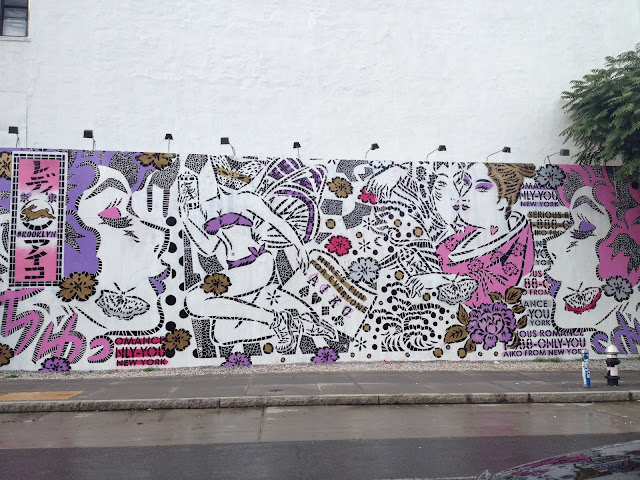 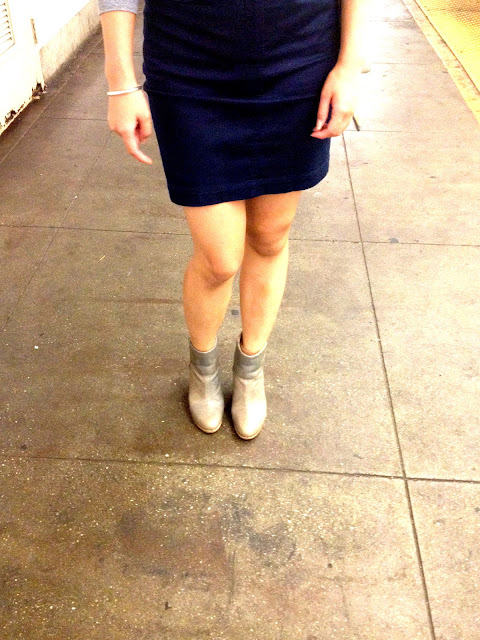 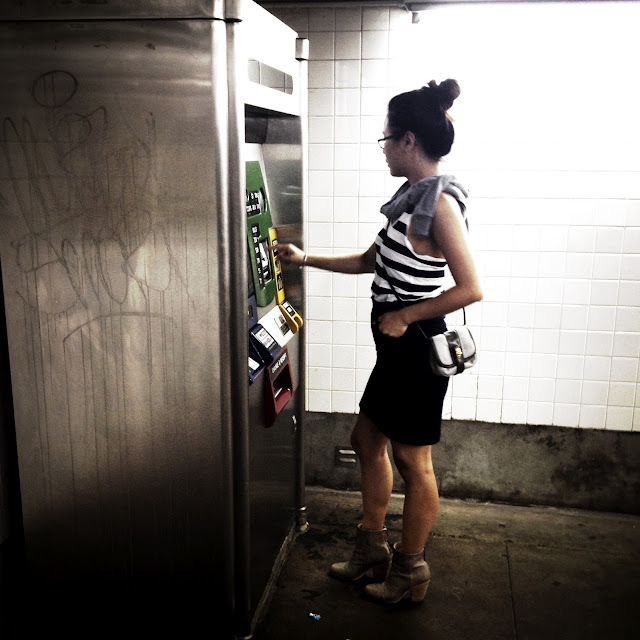 After a little rain, the city became a little bit cooler and more tolerable.

After being cooped up at home most of the day, we decided to grab a late night bite and take a little stroll in the Lower East Side.

This is the second time I'm wearing my booties and still breaking them in. I could have not lasted more than 3 hours in them with 30 minutes of consistent walking. They are not particularly high but I think the leather needs to soften up a little bit more before they become comfy. Or at least I hope they will!

Staying at my sister's place with her very own petting zoo:
Doing my own nails and not messing it up too badly:


Having the most delicious of meals with good friends at Le Club Chasse et Peche:

A nice stroll down in the Old Port after a wonderful fireworks show from France. 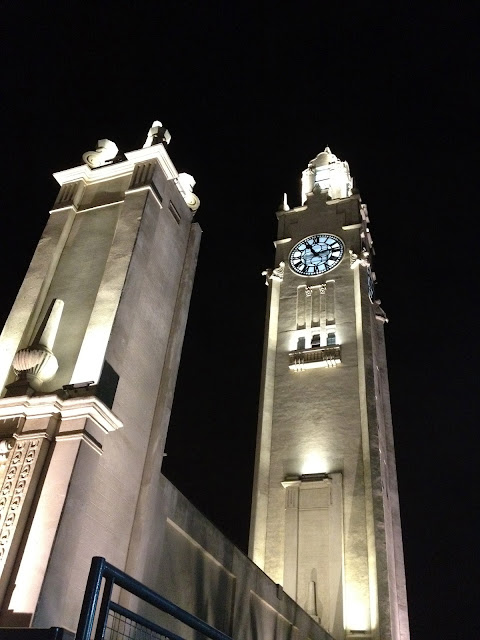 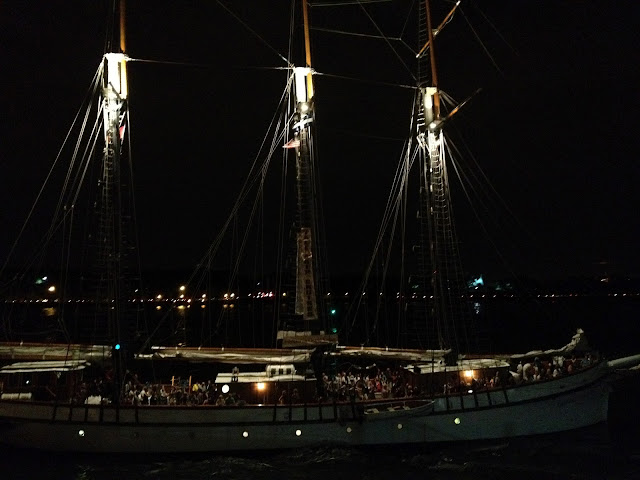 Playing hide and seek with Poofy. 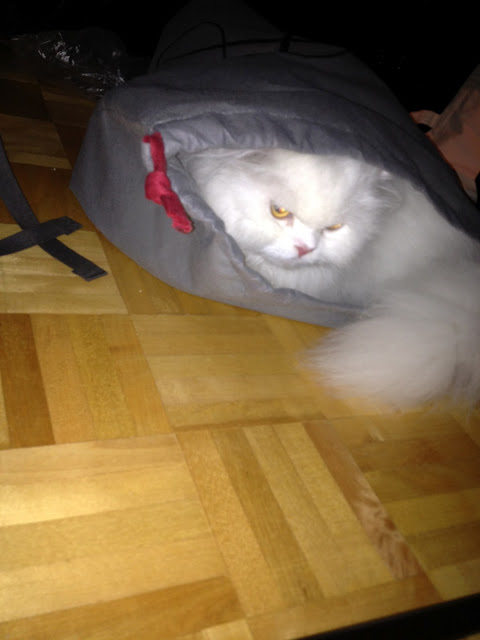 Going to Jean Talon market for great local produce. Although the sweet and delicious grapefruits I bought were from South Africa. 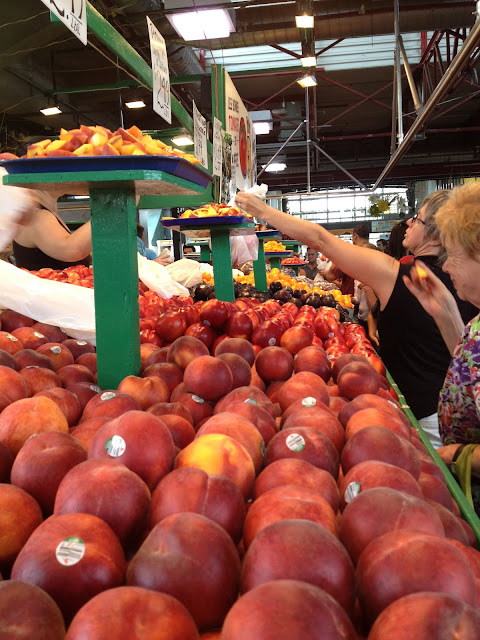 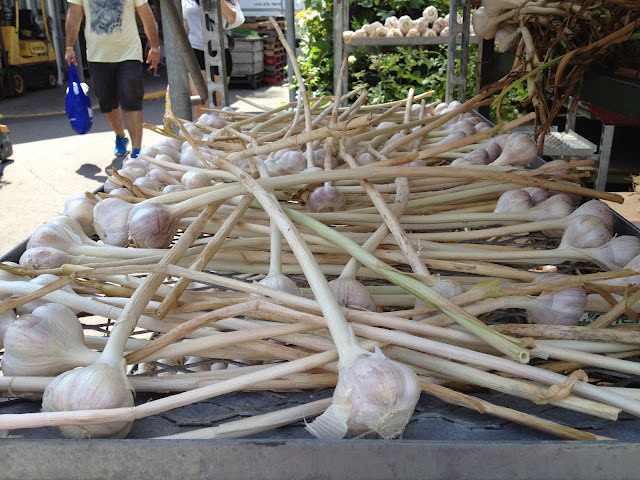 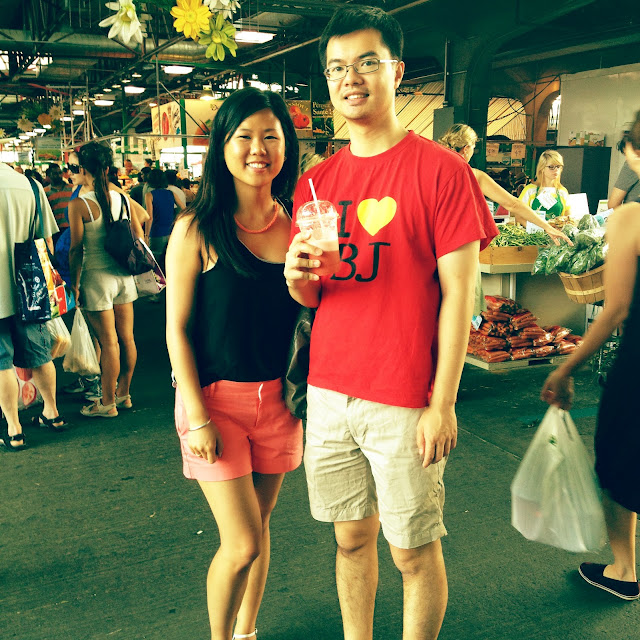 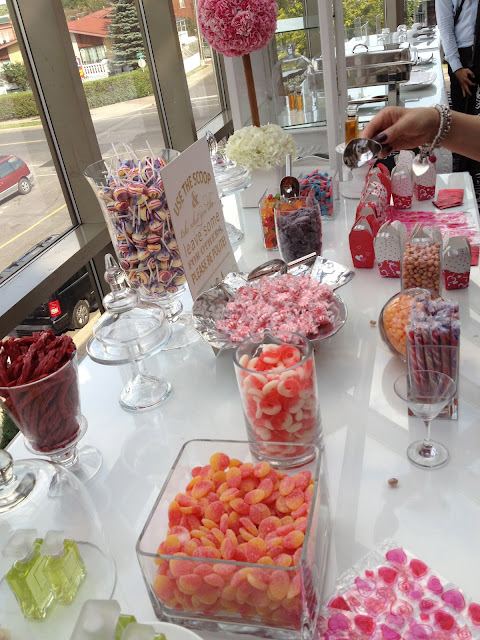 Jo Malone cologne samples in the ladies and men's room: 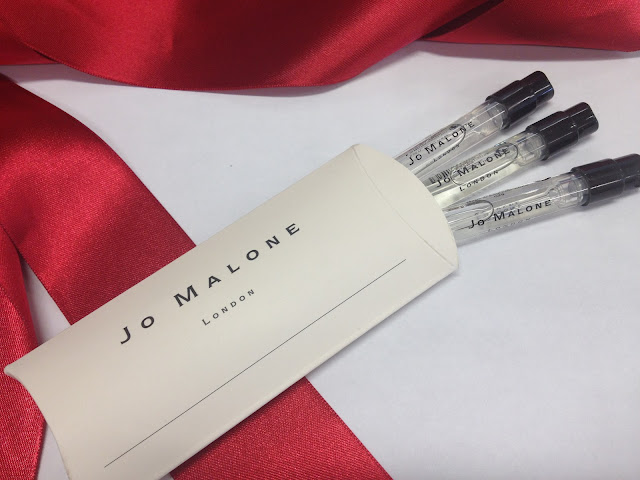 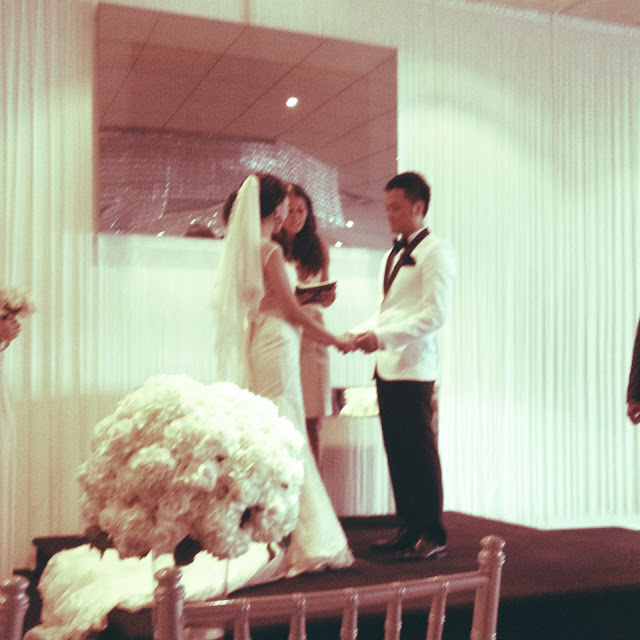 Seeing friends at the wedding that I have not seen in almost 10 years = fun! 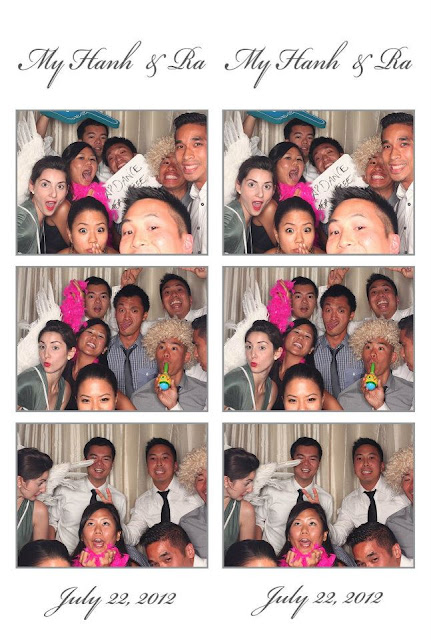 Taking a well-deserved rest on a warm, fluffy kitty pillow...before it ran away. 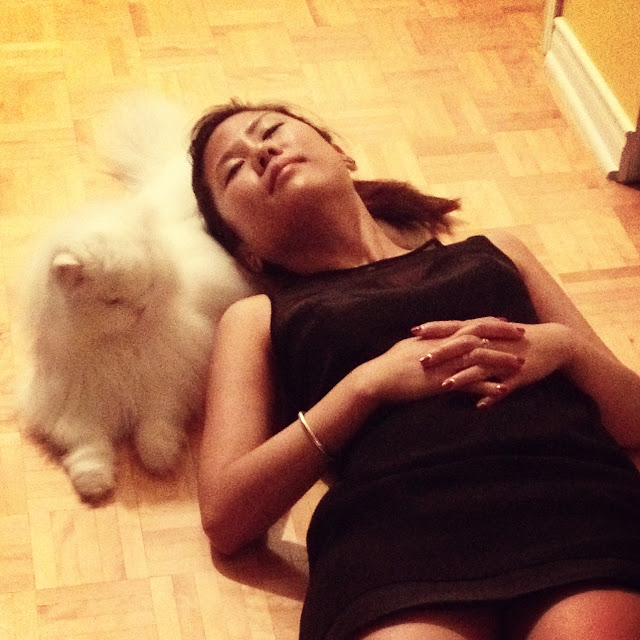 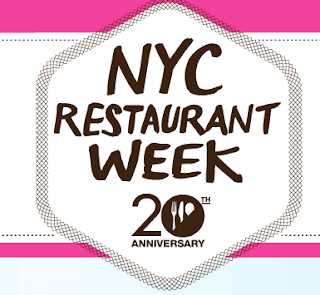 In Montreal, 'Restaurant week' consist of now 7 participating restaurants..I think that's 2 more since it was first established. It is also the same restaurants each year. It is called 'Happening Gourmand' and I think Montrealers are craving for more.

When I arrived to New York, I wasn't excited to hear about Restaurant week until I saw the LIST. The list of hundreds of participating restaurants and I freaked! It does make picking a lot harder but at least there are more than 7 choices!

Impressed?? I was and now I'm just like meh..This is what I have to live with :P AND it is held TWICE a year!

I actually only tried a couple of restaurants during restaurant week in previous years (e.g. Fig and Olive and Kittichai) and the problem is, I always want something OFF-menu and that's how my experience of budgeted eating ends. Oh well. At least the purpose of getting our butts through the door worked.

I have of course, compiled a list of restaurants I'd like to try. I'm not familiar with many of the restaurants but I've picked the ones that "sound" good. Does that make sense?

You can help me knock some off the list if you know it's not worth it!
I've starred the ones I've been interested in trying without Resto week.

-Aquavit (Scandinavian)
-Ben and Jack's steakhouse on 5th (Steakhouse)
-Fig & Olive (I tried this last resto week and the truffle mushroom soup is memorable)
-*Hill Country Barbecue Market (Barbecue/Southern)
-Lyon (French, and I always like French and I'd like to visit Lyon one day)
-Marble lane (American New). I've passed by this place and it's fancy fancy.
-Marseille (French. Again, I like French and I'd like to visit Marseille one day).
-Maze by Gordon Ramsay (French). Famous chef right?
-*Mercer kitchen (Soho). This place used to be bangin', maybe it's still worth a visit.
-Michael Jordan's The Steak House N.Y.C. Is this affiliated with the basketball superstar of all-time?
-Morimoto/NY (Japanese). For those who would like to try this place once or second time.
-Nobu (Japanese). I heard this place is overrated and don't really want to try it.
-*Nougatine at Jean Georges! (French).
-*Park Avenue Summer (American New). This one was highly recommended by my coworkers.
-Porter House NY. I like the steak there!
-*Red Rooster Harlem (American New). Marcus Samuelsson's comfort food.
-Ruth's Chris Steak house. I saw this in Taipei before.
-*Spice Market (Asian fusion). Always on tourist's to-eat list.
-Tao (Asian Fusion). This place was mentioned on 'Sex And the city' ..so passé.
-Todd English Food Hall (Continental).
-*Vic and Anthony's Steakhouse (Steakhouse).

Did I miss anything?
Probably.
Any suggestions?


It seems that most Brooklynites (or Manhattanites who visit Smorgasburg) know about The Meat Hook and we're no exception. We have no excuse not to especially when it's about 7 blocks away from our place. The Meat Hook consist of a butcher shop, a kitchen supply store filled with a wide range of culinary goodies and a kitchen where cooking classes take place! For those who are interested in home brewery, they got you covered! We sometimes love to just drop by mostly to wander around the shop with no plans to buy anything but usually end up getting something anyway.

They are also affiliated with 'The Brooklyn Kitchen' where cooking classes are offered weekly and appeal to different kinds of taste! You can learn to make everything from sushi,bread, pies, pasta, ice cream to mozzarella, even learn some knife handling skills and lots more! From time to time, they have special treats like learning how to make homemade pizza a la oh-so-very very popular and delicious Roberta's with two chefs from Roberta's?? How cool is that?

Since we have a newly acquired mini grill and were planning a mini BBQ party at our place, we knew the place to get our beef and sausages would be from 'The Meat Hook' no doubt!

'The Meat Hook' takes pride in their products and pay special attention to the local farm suppliers and the quality of meat they supply to their customers. This is why the ground beef were $6.99/lb as oppose to the $1-2/lb you get at regular grocery stores. Absolutely no fillers! All their cuts come from local farms in New York State however on their website, they mention if you want special cuts from Japan or Argentina, they can accomodate! Interesting no?
They serve mainly beef, porc and lamb.Learn more here!

Here's bone marrow we picked up for dinner a couple of months ago. Delicious and easy to prepare.


We first thought of making kim chi burger or add onions, herbs and cheese but when you have good freshly ground beef, it is unnecessary to overcompensate with the extras. Just appreciate the pure taste of freshly ground beef. We followed simple burger making guidelines inspired by an article found in Bon Apetit's mag but I found the recipe online here.

Remember, a tasty patty needs to be fatty or else it will be all dry and full of blahness. Pick 80% lean meat/20% oh must-have delicious fat and we sprinkled with kosher salt and freshly ground peppercorn. We used Martin's potato buns and garnished with fresh vine red tomatoes, red onions, all-American cheese, crispy lettuce such as iceberg is preferred though we just used red leaf here. Of course your Ketchup, mayo and mustard. If you want, you can make a special sauce too. I mixed Hellmann's mayo and Heinz ketchup and added some chopped up Kosher pickles. You can also add spicy sauce at any ratios to your liking :).


We picked up the following sausages (+comments taken from Meat Hook's sassy staff):

French onion: "A pork, beef and Swiss cheese concoction that came about when we had too much time on our hands. Fresh thyme and marjoram add the flavor and yes, there are caramelized onions too"
Chicken and garlic sausage:"For those chicken sausage fans out there we have this easy adaptable sausage.  We roast the garlic and make a paste of it mixed with herbs before introducing it to the chicken.  It’s very early Boulud or Puck.  In a good way."
House Italian Braising Sausage:"A slightly spicy link that we dry for several weeks to intensify the flavor of paprika, garlic and fennel inside.  Add it to a red sauce or white bean stew to give it a porky intensity!"

Don't they all sound so tasty?? Indeed they were! Cook to 160-165 deg F to make sure it is good to eat. Don't overcook!
They've got meats and sausages to offer on a weekly basis. You just have to check their website or call them to find out what is in stock as they make these in-house!