In Pictures: Recap of my Fashion Night Out night #FNO 2012

I didn't get to do anything on my list except for one thing (Bottega Veneta when I thought they were giving away free bags) but I still got to see a lot people! If you follow me on instagram then you have already seen half of the pictures that is going to be posted here.

Here's a brief recap of my Fashion Night Out from Upper east side to the Meatpacking district. Skipped Soho so I didn't get any exclusive gift with purchases :(
Note that all the name dropping I'm doing is not from my own 'fashionable' knowledge as what I know is very very superficial and very glad that I was with two knowledgeable companions (including an ex-supermodel!).

The evening began at 5:45 p.m. sharp for me in front of Ted Baker where I was suppose to meet up with a friend and her friends. Of course, lateness is expected for girls so I went in Ted Baker first and got some free white chocolate and then went to check out Sephora right next door where Marchesa dresses were displayed. At 6:15, everyone finally arrived and marched up on 5th Avenue towards Saks Fifth Avenue. There, Ling wanted to see Blue Man Group perform on the 2nd floor while I got to take a peek at Oscar de la Renta signing cards to promote his new fragrance on the first floor. The line was so long and I don't think everyone got an autograph. At Saks, there was lots of things going on on each floor. I saw some Olympic medalist fencing athletes, I saw CDFA's ex executive director Fern Mallis.
The Blue Man Group did nothing spectacular and there was flash mob dance who did most of the 'performance'. That was time wasted since they were 15 minutes late too. 15 minutes on FNO is precious time!

Saks was getting crowded and boring so we left to head up 5th Avenue some more. While Ling went to Uniqlo to see if she could get a free makeup touch up by Shiseido, we passed by Bottega Veneta to check out the new eco-friendly bag where there were only 100 released worldwide and 15 in the US. No one was buying them. It looked okay and they were $1950 or something each. Afterwards,we got into Omega's private party before doors open to the public at 8 p.m. and there were snacks, martinis and cosmos served. There was a DJ and a photographer who took picture of guests and gave out the picture in a nice silver 'Omega' engraved frame.

We then hopped over to Prada where the store was completely decorated for FNO by Hamish Bowles. Nate Berkus from TLC's Nate show was present but not sure if he was there for an event or to support. He was quite popular with the older ladies (those who watch Oprah during the daytime probably). The girls chatted up with him to try to get on the show but only to find out he no longer has the show. Oh well, moving on. From Prada, we walked to Dior where we bumped into legendary Bill Cunningham (Apparently you can spot him often around town but this is my first glimpse of him! I have yet to see his documentaries!) snapping away at people on the streets, duh! Ling knew him and asked to take a picture together but he was stressed and responded : "I'm under a lot of pressure right now" and continued strolling while many many many people tapped him on the shoulder to give compliments or to take a picture..but he just kept going. Dedicated!

We were chasing a couple of Yilin's friends from LV to Thomas Pink to Fendi but never caught up and somehow they ended up downtown. Our last stop in the upper east side was the toilets at the Warwick hotel to unload the bladder and also peaked into Manolo Blahnik which was closed due to the crowd for a performance by Cyndi Lauper.

We hopped on the E straight down to the Meatpacking district. Lots of well-dressed fashionistas taking that train and making their last stop of the night at the Meatpacking as well. Over there, QVC had a set up with tons of clothes for people to try and take snapshots, Maybelline was doing free makeup and most of the stores we wanted to see were closed our over capacity including DVF and Alexander McQueen. It was already 9:30 p.m. so we were not surprised. So we ended the night at a party at Moschino where refreshment were served and saw electro violinist guitarist Caitlin Moe do her thing.

Did I miss anything?

The night ended with a late night dinner at The Coffee shop on Union Square. Only fashion could make girls forget their hunger though I was feeling weaker and weaker by the hour.

Next year, we gotta pace ourselves and see more! 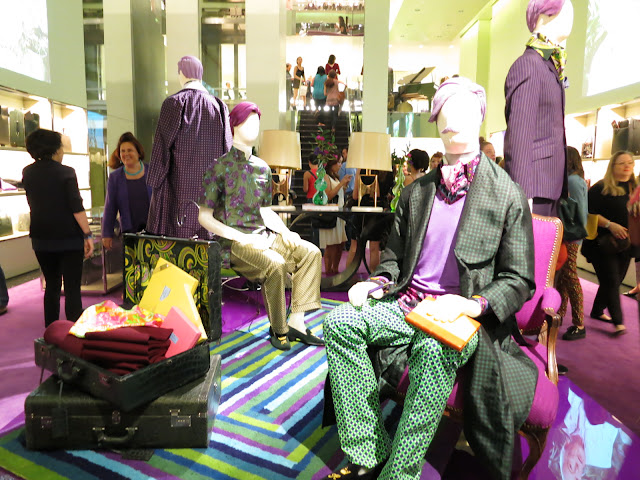 Photos taken by me and Yilin.

Email ThisBlogThis!Share to TwitterShare to FacebookShare to Pinterest
Labels: fashion night out, FNO, NYC shopping, what to do in NY