Dave asked me what we were doing today but I had no plans in mind. He then asked me (to my wondrous surprise) if there were any sample sales going on in town. (!!!). So I take a look at RackedNY's weekend shopping report to remind me what sales were going on and he was in luck, a men's only sample sale at Freemans Sporting Club. A sample sale I had no real interest in when I first read about it. I actually was not sure what the store/brand was until Dave kindly reminded me that it was where we had one of our first dates when I first came to visit him in NY. He took me to brunch at Freemans (not the store) and we checked out the store right next door afterwards which was Freemans Sporting Club attached to an old school barber shop! I was like, oh yeaaa that store, cool, okay! So I went over Sample Sally's to see her reported price list and saw denims were on sale which is just what Dave was looking for. The holes in his last good pair of jeans are getting bigger and its getting drafty down there. So out we went to the LES and Dave bought himself a pair of dark indigo denim and sneakers. The jeans are 100% cotton so they feel kind of rough and rigid but he didn't mind that and eventually he'll break them in. They are made a little bit small so he got one size bigger than usual. I made him look at the shoes selection even if he wasn't interested (he only buys what he needs) but they were only $15 (reg. $60) We first had our eyes on a plain pair of black lace ups (Sumfun Lo style) from PF Flyers because they were the only small size (size 8) left on the shop floor but then Dave spotted shoes behind the cashier where a lone size 9 yellow PF Flyers Windjammers was left. He tried them on, I thought they looked cute and so he got them. Perfect Spring and Summer shoe. There were lots of size 10-11. The other stuff at the sale weren't interesting. Not to me anyway. I thought there were these really well made and nicely tailored cotton khaki pants that were worth trying on for at $50. It's not Dave's style but I thought they looked good and the material was of good quality, thick and sturdy and made in the USA like everything else in the store except the shoes. Other stuff were hard to shop as they were mostly stacked in bins and it was hard to maneuver around the small store. The $5 espadrilles were all large sizes and there were tons of $5 flip flops similar to ones you can find at Old Navy where it is 2 for $5 :) There seems to be tons of stocks in shirts and outerwear which is worth a look if you're interested! We then stopped by the retail store next door to see what we "scored" and denims were priced at $200-$300! But Dave surprised me once more, and told me that $50 is the most he has spent on jeans! Gasp....Now you know (and I know) why he doesn't comprehend my shopping habits? 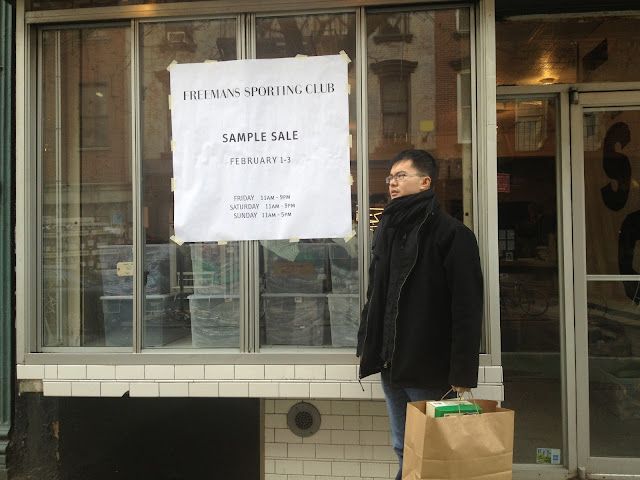 Dave being reminded that sample sales are not only fun for women but men can "score" too :)