Hiking without shoes....Cooling off at Wailua Falls [Kauai, Hawaii]

We visited one waterfall during our entire stay in Hawaii. That's crazy right? There are hundreds of waterfalls in Hawaii and we only visited uno. Okay, so we did see a couple of falls but from really far (when you have to squint-to-see-better type of far) during a hike out in Waimea Canyon back in Oahu. But according to me, it doesn't count because we didn't TOUCH them.

We were on a quest to visit a nice tall one called Hanakoa Falls at the 6 mile mark on the Kalalau trail. I had read that Hanakoa Falls is around 1000-foot tall where only 300-foot of it is visible from the ground and although there was a closer, easier hike, to see this other fall on the Kalalau trail, we wanted to see this bigger one. However, 6 miles later, we find out upon our arrival to Hanakoa streams which is about 1/2 mile away from the falls, that the falls was dry! We decided to turn back and we were definitely disappointed since it was not a short "stroll" mind you.

So on the day before we leave Kauai, when we actually planned to not do much and just relax, we decided (more like me forcing Dave) to visit one of the two falls (Wailua and Opaeka'a) that were recommended by the concierge. We (I) decided on Wailua Falls because it was the taller one of the two and a shorter driving distance too from our resort.

We were told that we could drive up there and there would be no hiking necessary to SEE the falls which sounded perfect on our "day off" (day off because we were having quite an exhausting honeymoon so far with all the hikes and snorkeling and turtle chasin'). However, we were not told (my fault for not asking) that if we wanted to take a dip by the falls, we needed to take a short trail down to the falls.

Trails are usually not a biggie. With hiking boots, it's a piece of cake but without them, it is like walking in heels on cobblestones. Guess what we wore? Not boots. We left them back at the hotel. I had my Boss leather thong sandals and Dave had his one and only pair of decent sandals. We were also in our "day off" attire so I was wearing a dress and Dave had clean shorts and a nice button down. We did not want to ruin them and so, we would just have to turn back right? Yes, but not for me. It was our last day in Kauai and we had not seen any falls. I suggested that we take off our shoes and just go for it! YOLO says Drake! I was probably pretty annoying with my stubbornness and I could see it in Dave's eyes. Why did I marry this monster? he probably thought. Dave didn't think it was a good idea. Of course it's not! All those spiky rocks and getting splinters from all those fallen branches... and apparently you can catch Leptospira just by being in the jungle of Hawaii. Well, of course I didn't know any of that before I trekked down but I didn't care. Some visitors who were coming back from the falls said it was worth it and could be do-able without shoes if I didn't mind the mud (her running shoes was covered in mud). I was determined and became a wild child. Dave decided to stay back and suggested that I go alone (I actually was not going to ditch him but since he suggested it...). So, to prove to him that he worried too much and it was all A-okay, I confronted my own worries and went down without him.

Some of my thoughts during my trek down: "Dave's a baby. This is easy peasy. Holy shit there's a lot of wood chips. Please no splinters, please no splinters. Fuck, mosquitoes. Dave was right...Why am I doing this?! No, he is not right. The falls are worth it and I am going to take lots of pictures to show him.. Ew! A mud-water puddle combo! Whyyyy am I doing this? I should turn back. No! Dave will be right. What am I trying to prove here? ...David is probably taking a nap now..... The falls better be worth it.... EW! Mushy leaves...weird feelings! Gross... this is so gross. Whyyyy am I doing this? I'll wash my feet by the falls, it will be clean. The pretty falls..... Fucking mosquitos.. It will be worth it. I can hear the falls. Ouch ouch ouch....". That was about the first 15 minutes of the 15 minute trek. A couple of times I wanted to turn back but to prove Dave that it was "easy" I continued. Thanks Dave for the being my unconscious motivator!

Mosquitos were attacking my juicy legs and the feeling of mud underneath my feet and squeezing out between my toes was a pretty icky feeling. There were ropes to help you along the way which was pretty helpful. The what-could-have-been-a-short hike took a lot longer without shoes but when I got to the falls, it was all worth it. The falls were a beauty up close, just the way I imagined it. Nothing like what we saw up there from the parking lot.. Since Dave wasn't with me and I felt slightly defeated by mosquitos, I just wanted to quickly take a few snapshots, clean my feet and get out of there. No swimming under the falls because Dave was waiting. As I turn back, I see my shirtless lover coming down the trail. He left his nice shirt in the car to avoid getting it dirty. I was so stupidly happy! He came for me! My hero! I gave him kisses and hugged him: "This is why I married you!!". I changed into my bikini and jumped into the chilly ass pool and made my dreams come true.

Here are some pictures of the 173-foot Wailua Falls... 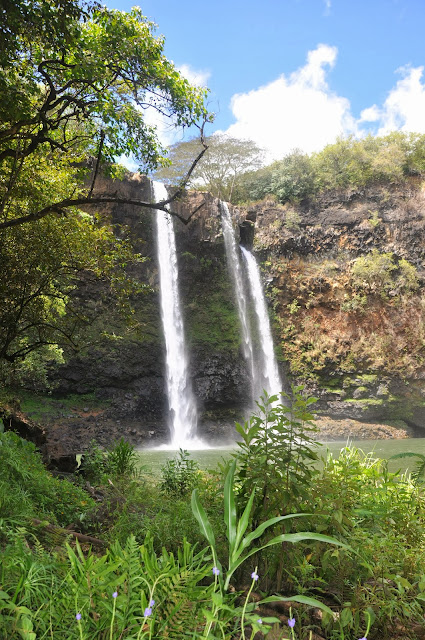 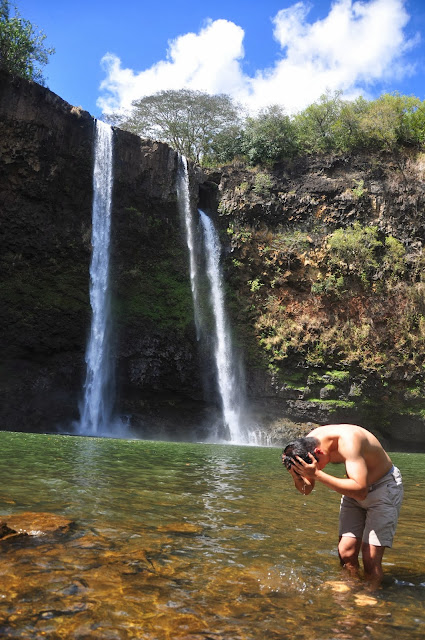 The falls were more powerful than I imagined. The water current was pretty strong and I could not get very close. We were also warned that there were fallings rocks so it was best not to get too close. I didn't push my luck this time so I stayed at a safe distance. 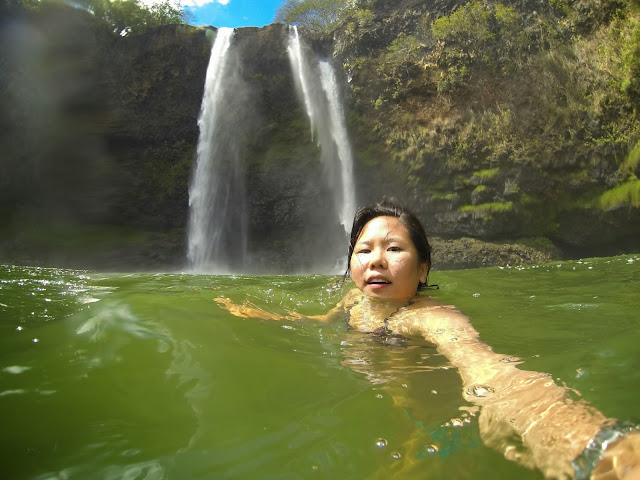 Exiting the trail. Dave was looking forward to going back to our hotel for our couple's massage. 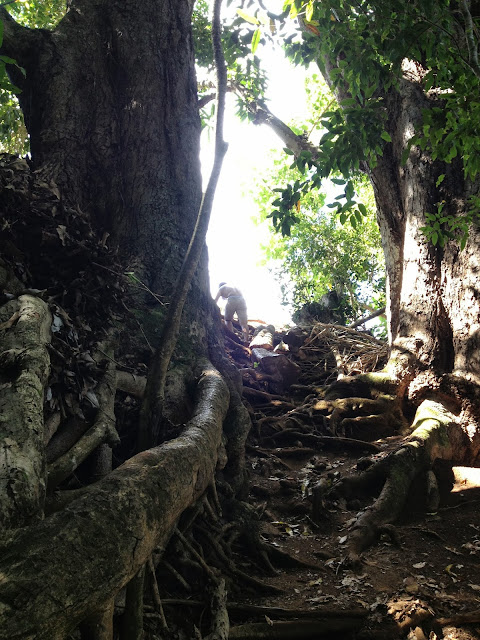