I wanted to write about this experience as it is still fresh in my mind. Waimea bay was one of the two snorkeling spots we visited in Oahu. We were only in Oahu for 2 full days (not including the day we arrived and day we left) and had to pick our spots carefully. We had already done the popular Hanauma Bay on our first day and had two other spots in mind for our second day including Sharks Cover and Turtle Bay. Luckily, Dave found Waimea Bay during his last minute research (I am so grateful for his patience to look up stuff to do)!! Waimea bay is best known for being home of the first Big Wave surf riding phenomenon and hosting famed surfing competitions during the Winter time (100 foot waves?!). The beach is somewhat secluded and not too large. There are limited snorkeling spots but when I read that there could be possible spinner dolphins sightings from the beach, I was sold!

The dolphin sightings were on and off as pods of dolphins (not sure if they are the same ones) swam by the beach. They were a good distance away so no one really swam out to see them but there were many people on paddle boats that did and probably got really up close (jealous!). Because no one swam out, I stayed behind since I didn't want to be alone out there not knowing what is lurking under the sea. After about an hour of snorkeling and meeting many turtles, I decided that I would not miss my chance to swim with dolphins and that I must go out there. There were no lifeguards when we got there so I felt unsafe to swim alone and sadly, Dave wasn't confident in his swimming capabilities just yet. He only took swimming class right before our vacation. Before heading out, I spoke to two paddlers who had just made the trip back and told them that I would be making a swim excursion to see the dolphins and if possible, to look out for me in case something goes wrong. They said no problem but that the lifeguard has just arrived and setting up and so it would be totally safe for me to go. Cool! I was ready! About 10 minutes into the swim straight out from the beach, I see two people swimming nearby! I was so happy. It was getting a bit scary especially looking down at the dark deep blue sea and shark attacks in the back of my mind. I quickly caught up to them and screamed: "Hiiii...I'm so glad to see you guys out here... Can I join you guys!?!". And so, we ventured closer to the dolphins altogether and was even later joined by a man and a dog on a kayak. When I got back to shore, Dave told me a lifeguard paddled close to us as well so he stopped worrying and continued tanning. I didn't even notice the lifeguard because I was frantically trying to film and take pictures of the dolphins! At that point, I was on a high. I am swimming with wild dolphins!! This was no Sea World show here as I saw dolphins swim by and jumping out of the water. They didn't stay for too long and after about ten minutes, we all swam back to shore. Best.day.of.my.life.

Pictures? But of course! A video too!

And of course, to make my experience complete at The Waimea Bay, I had to jump off this 30 foot cliff by the beach. It looked easy but when I got up there, it took me about 5 (or 15?) minutes to rev up the courage to just jump! 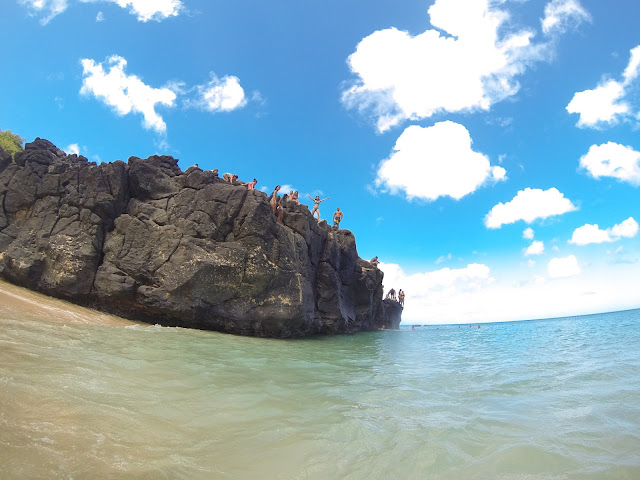 Want to see all of this in motion? I made a video! No video of me jumping off the cliff though because by the time I found the guts to jump, the camera was already out of battery :( That's okay, I will forever remember jumping off this cliff. I hurt my ass real bad doing it too. Big time wedgie!