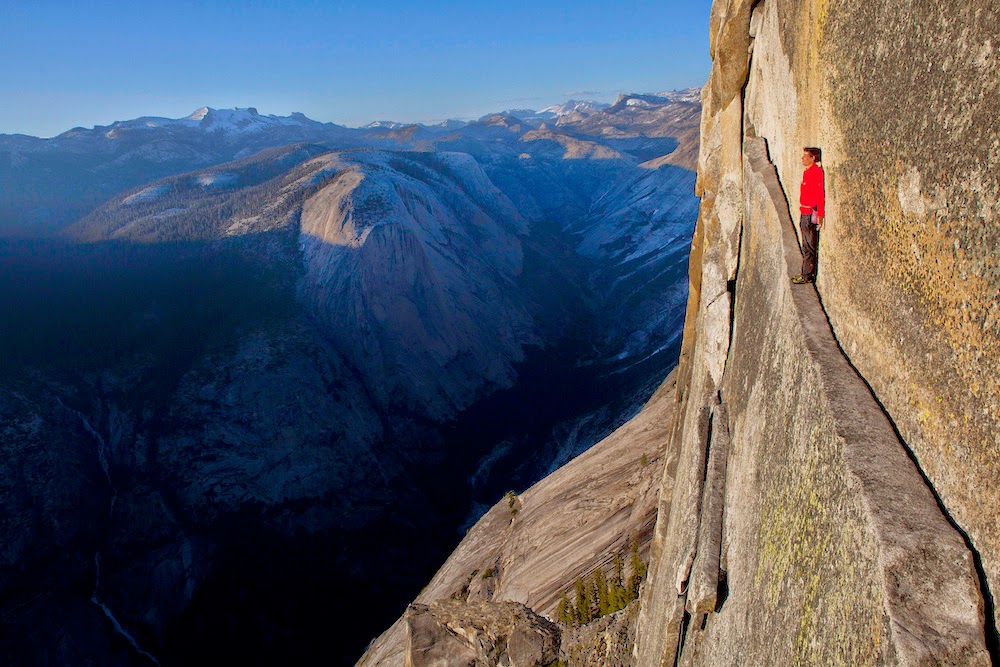 If you don't know who Alex Honnold is, watch this and this. He is one of my husband's idol and I have never seen him so excited about meeting anyone before. Alex Honnold is definitely a celebrity in our books even though he's not known by many people (but definitely a superstar in the climbing community.) Not that I'm a climbing fanatic or anything but I just know who the awesome people are out there. I've had my share of blind stares when I talk about this guy. Keep reading to see pictures of me holding his hands ...

Did you click on the the videos yet? (Here's another short one from Squarespace if time is of an essence). Every single time I watch his videos, the palm of my hands and feet become so sweaty from anxiousness. Even after watching the same videos over and over again and knowing Alex won't slip and fall, I still feel nervous every time. Just imagining him alone up there without any ropes, climbing a wall like spiderman is completely surreal and unimaginable to me (and to most regular joes I'm sure). A stunt you think someone will only pull off once in their life is being done more than once by these courageous climbers. It takes a lot of courage. No one can mess with a guy that has the guts to do this.

He says sometimes he feels fear but I just can't see it...
We arrived early to Symphony Space and had the chance to attend the VIP meet-and-greet with Alex Honnold and Cedar Wright. Here, fans had the chance to mingle up close with them. I watched Alex scarf down food while trying to take pictures with fans and answer questions left and right. Very gracious! We both had the chance to take a picture with him too. Dave got to ask him a question: "What's the most common question you get from people?". Alex says people often ask him if he feels fear up when's he's climbing. 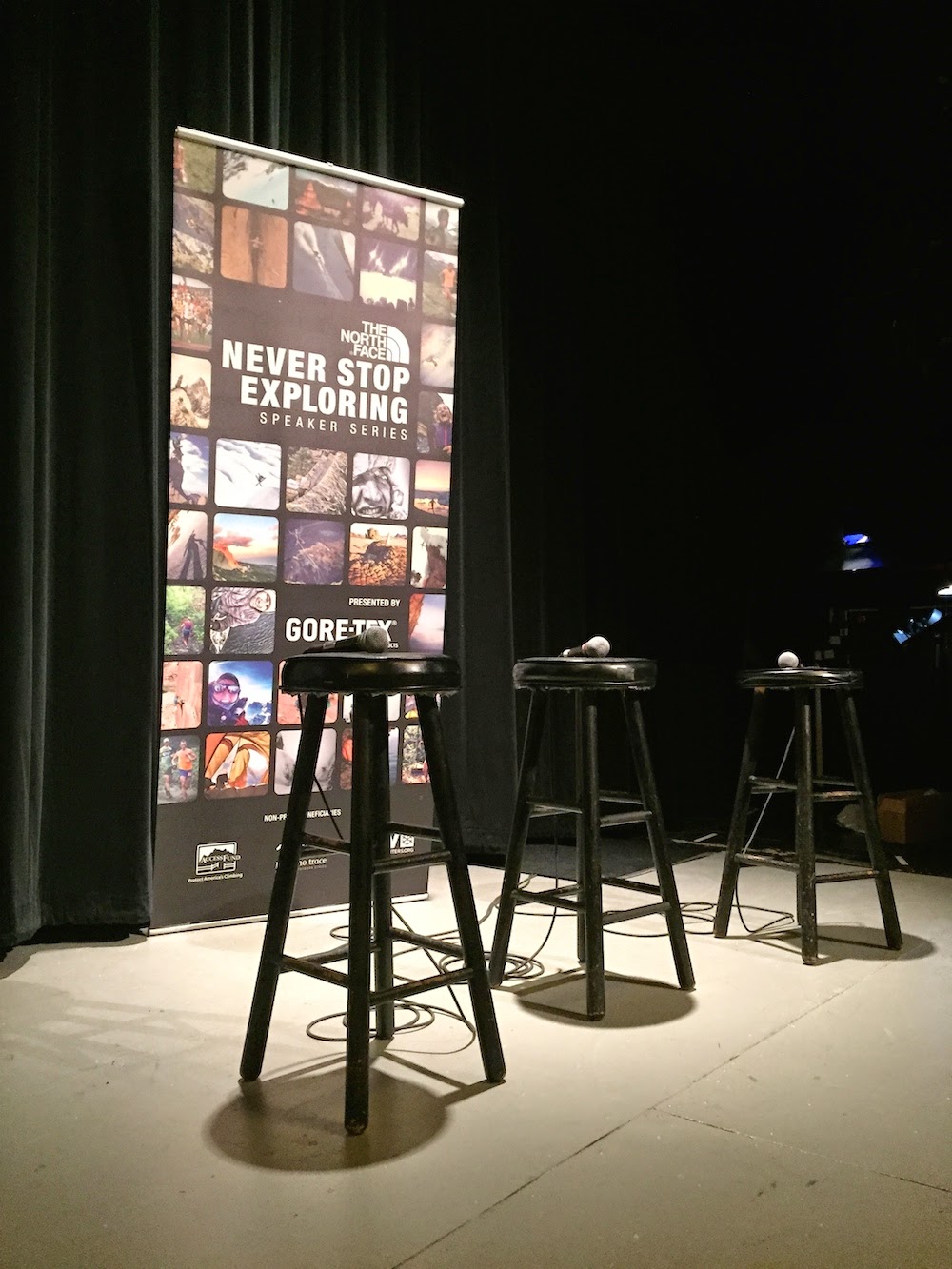 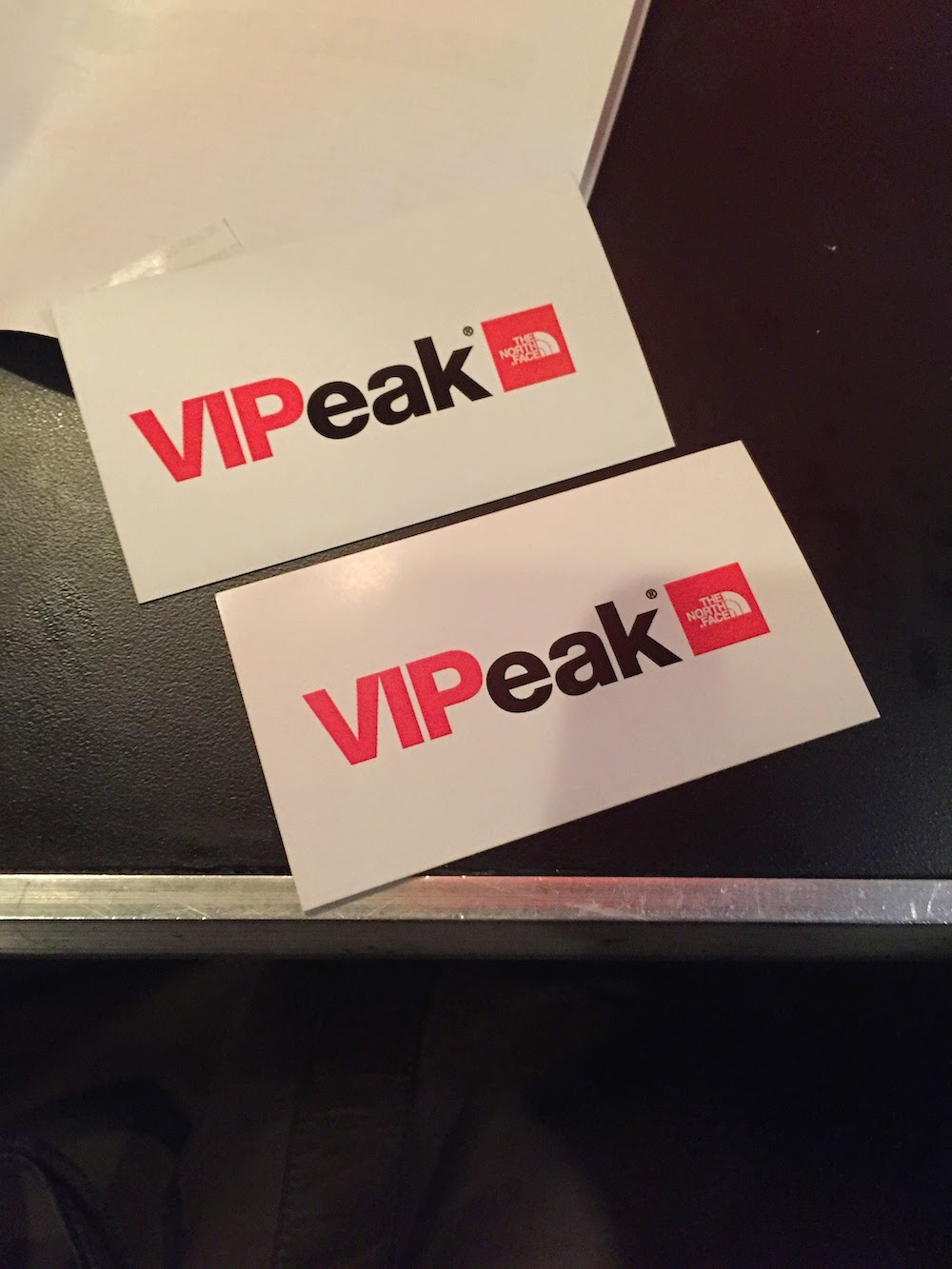 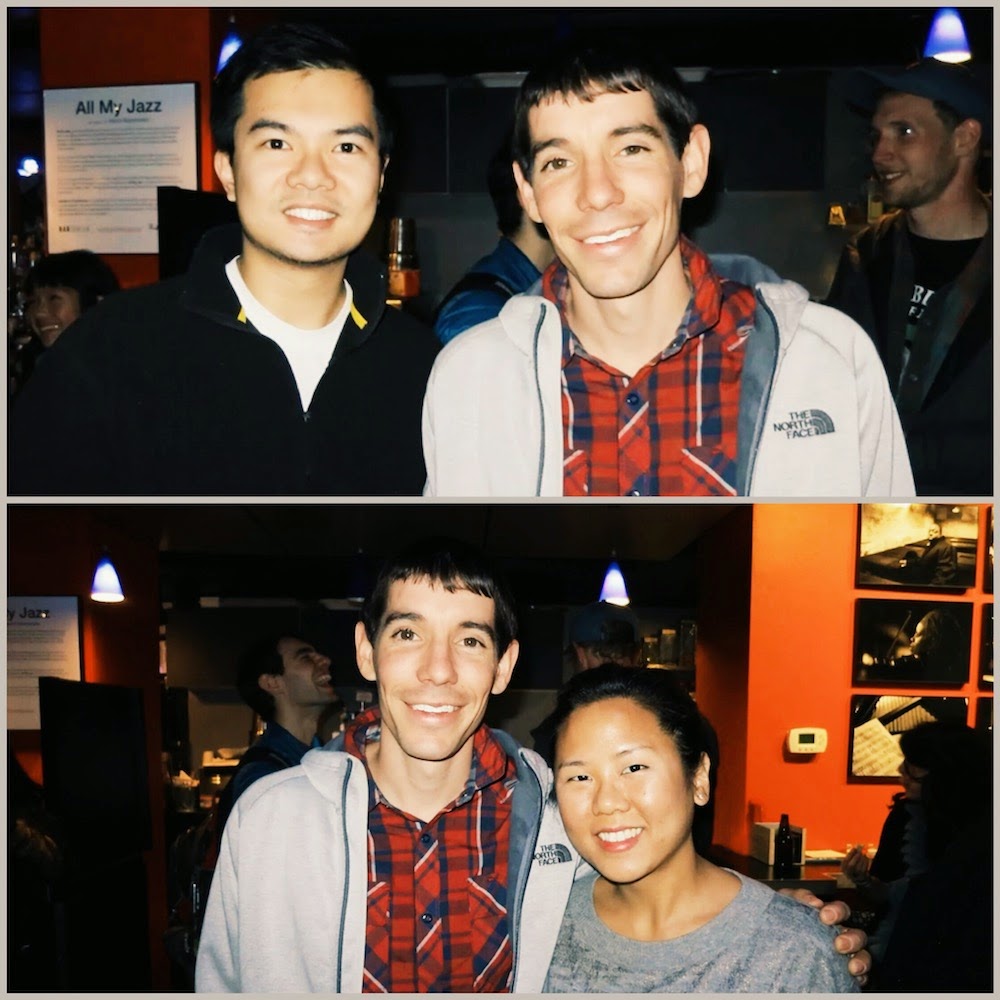 A bit later, when I saw his hand in the back of a fan's back and notice their ginormousity and knowing that his hands are his life-line in his death defying solo climbs, I just had to touch them. Something came over me to just grab his hand and told him I need to take a picture of me shaking his hand. I thought I was being weird but he seemed unphased and commented that my hand is in fact tiny compared to his! I shook his hand and Dave managed to snap a picture of me gushing over his hand. That's this picture below.

Following the reception, we went up to the theater to watch the short film "Sufferfest 2" which follows Alex and Cedar on their 700-mile bike journey through the Canyonlands and climbing 45 desert towers. Yes, that's 45 towers in less than three weeks! The film was completely hysterical with the duo. We really saw a side of Alex we didn't know about (that scene where he's pumping the air tire of his bike...). Cedar Wright did an excellent job at producing and directing this film! There was so many good parts but that puppy! I'm so happy they adopted the desert puppy during their journey! You can rent or watch the movie here. 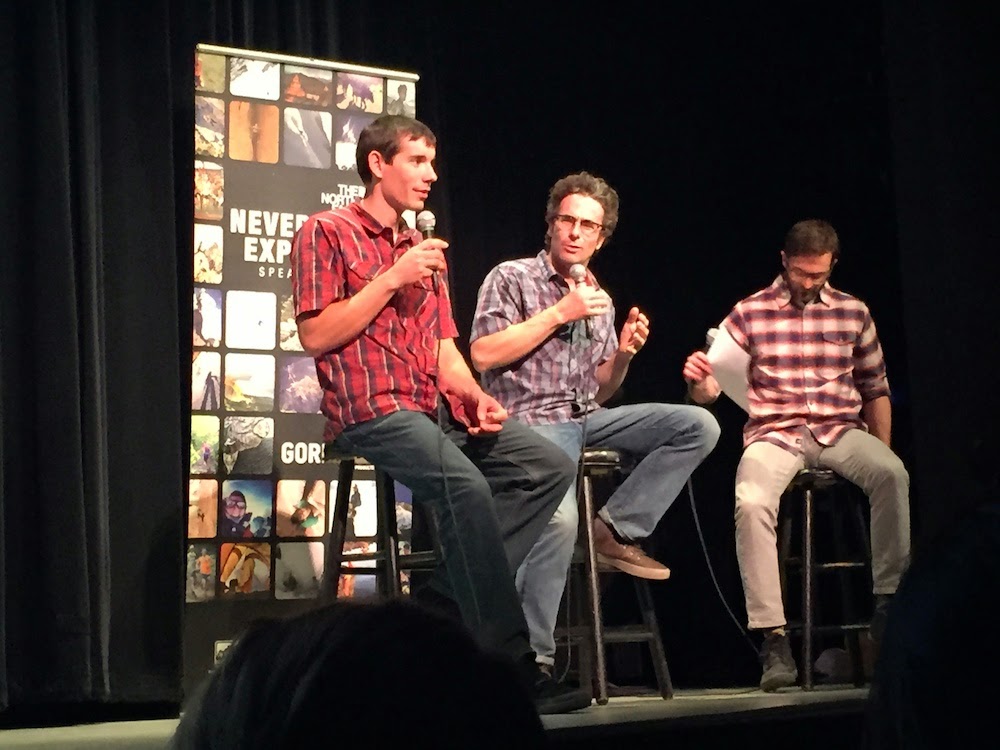 I missed most of the Q&A session because I had to catch Russell Peter's 'Almost Famous' show at Madison Square Garden happening the same night! I'm glad I made it to both though but barely!

Here's one last pic for inspiration...You see what I'm talking about?? 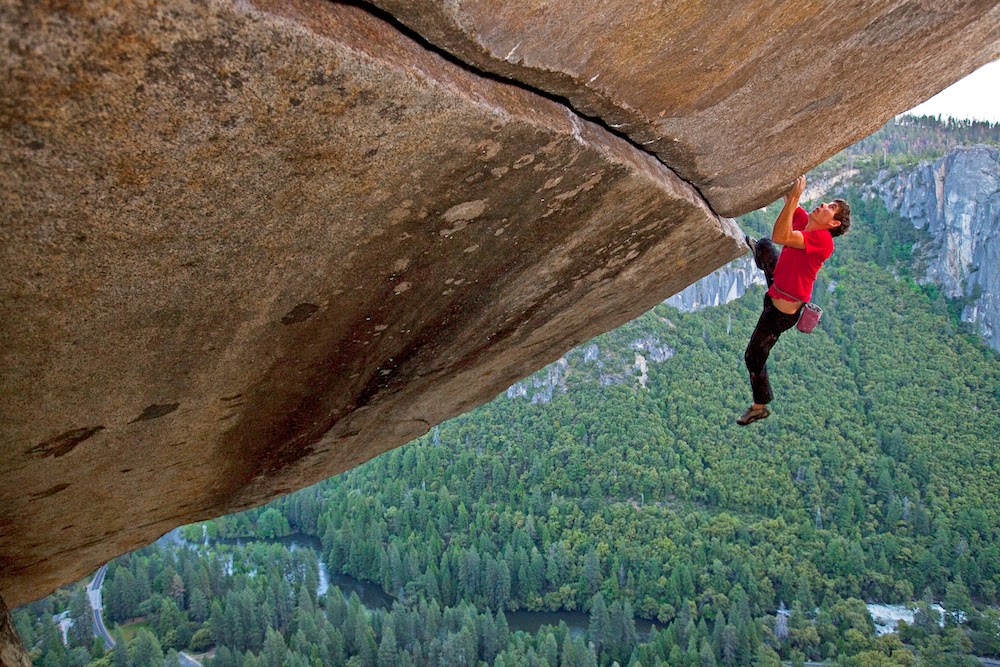 Photos of Alex climbing are taken from his website.

Thanks for stopping by x