nykeiko eats: All'onda. All around dissappointment + paying with Cover app

Last week was the beginning of Restaurant Week in NYC (February 16 - March 6). We skipped out on the last few ones since smaller portions and mediocre service never pleased anyone (especially Dave). However, sometimes when a new restaurant with high prices with good reviews might put you on the border of wondering if it is worth the splurge, Restaurant Week becomes a good idea. For those who just want a taste without breaking the bank.

A coworker booked a Saturday evening dinner spot with his family at All'onda and I decided to follow suit after he showed me some reviews about All'onda's uni pasta. Uni pasta? I was sold. The one time I tried uni pasta before was at Basta Pasta and really liked it.
Since we made reservations a bit early, I kind of forgot about the reservation until an email from Cover mentioned the addition of All'onda to their restaurant roster just in time for Restaurant Week.

Cover is a new phone app that let's people pay with their phone at participating New York restaurants. It's like Uber but for restaurants. It feels like you're dining and dashing because you don't have to deal with money. I had $40 in credit to use ($10 for signing up, $20 promotional credit and $10 from one referral) and it was a good time to try out the app. I also made Dave sign up for it which got me another $10 and when we decided to split the bill on the app, that's $60 free off our entire meal. Dinner for Restaurant Week is $38 per person. Sweet! However....keep reading.

We arrived at 5:30 p.m. on the dot and we were first to be seated at the restaurant. What we realize when we sat down was that Restaurant Week did not apply on Saturdays at All'onda. I quickly told my coworker but since we were already there, we might as well stay. No $38 per person anymore but we get to experience All'onda's at full value. So if we were disappointed, we could not blame Restaurant Week. Well, the menu is indeed pricy but after we finished, I thought everything was definitely overpriced. We're okay with expensive meals from time to time especially if it's worth the hype but not at All'onda.

To start, we had Arancini risotto balls for $12. They did mention that there was black truffle which I saw inside but couldn't taste? Usually truffle aroma is strong but it didn't happen for these balls (of lies). The Arancini was nice but probably because I was really hungry and love carbs! 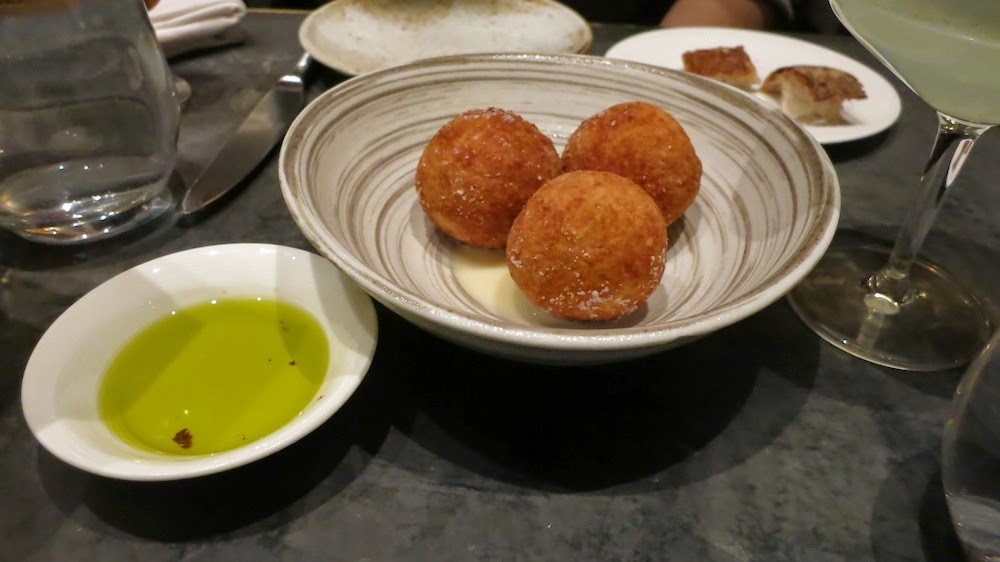 After my hunger was appeased from the first snack, my food criticality kicked in big time and that's when the meal went downhill for me.

I ordered the Spanish Mackerel appetizer because I simply love mackerel. I was told it was a raw appetizer which thrilled me but when the plate and I came face to face, I knew I'd be disappointed. First off, it was $16 for 4 little pieces of mackerel. The picture on their website shows 6 pieces and pictures on Yelp posted by other people showed 5-6 pieces. Did the chefs forget they were not serving for Restaurant Week that night? But like I said, we don't mind paying if it's absolutely delicious. Well, it wasn't. The taste of the mackerel was totally masked by all the crap they put on top which didn't even enhance the taste of the fish or vice versa. I give points for the presentation.

I was eager to start our main course which was pasta for the both of us. Dave ordered the Garganelli peekytoe crab pasta ($24) and I got the Bucatini uni pasta with bread crumbs ($32). Again, small portions. I was already thinking of what we could eat after the meal. Both dishes were a bit too salty for my taste but like a sea water kind of salty. The only thing I liked about the pastas was the crunchy breading they put on top. The smoked sea urchin was so small as well. Three small pieces to be exact. Again, were we paying full price for Restaurant Week portions? Maybe not for this dish but I was comparing it with the bigger pieces of uni I got with my uni pasta at Basta Pasta. They even forgot the herbs! I think I should not look at other people's photos first on Yelp because the more I compare, the more pissy I get. We, of course, choose not to get dessert.

Anyway, I don't know what happened that night but they let things slip and I wouldn't recommend this restaurant to anyone. Even though our Cover app credit covered $60 of our $135 meal (including taxes and tips), I still feel like we overpaid. To make matters worst, the restaurant accidentally switched our bill with my coworker's who also used the app to pay. It was an easy fix because we actually requested for an itemized receipt so we were able to email a copy of the receipt to the support email. They fixed it right away. The itemized receipt cannot be seen from the app which would be useful for mistakes like this.  No one has the time to tabulate their bill while ordering so for those who do not request an itemized bill, they can easily be over or even undercharged. In this case, my coworker was overcharged and we were undercharged. They were four people but we ordered alcohol.

Oh well, not everything was bad. This basil gimlet was pretty nice. $14. I think Dave enjoyed his beer as well. 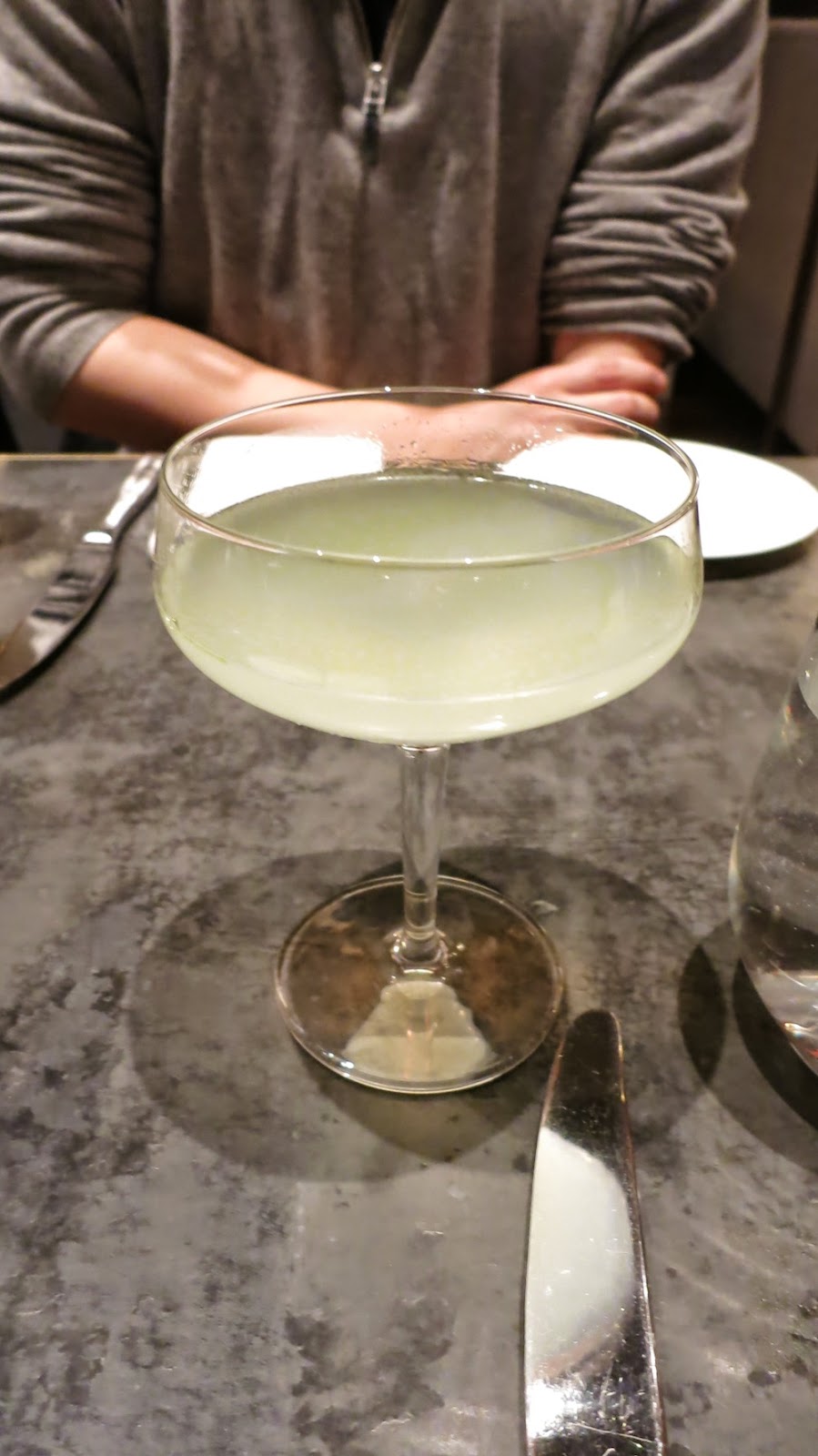 Three hours later, at home, I made this poutine with cheese curds we brought back from Montreal. This portion times 3 for the both of us. I was satisfied. 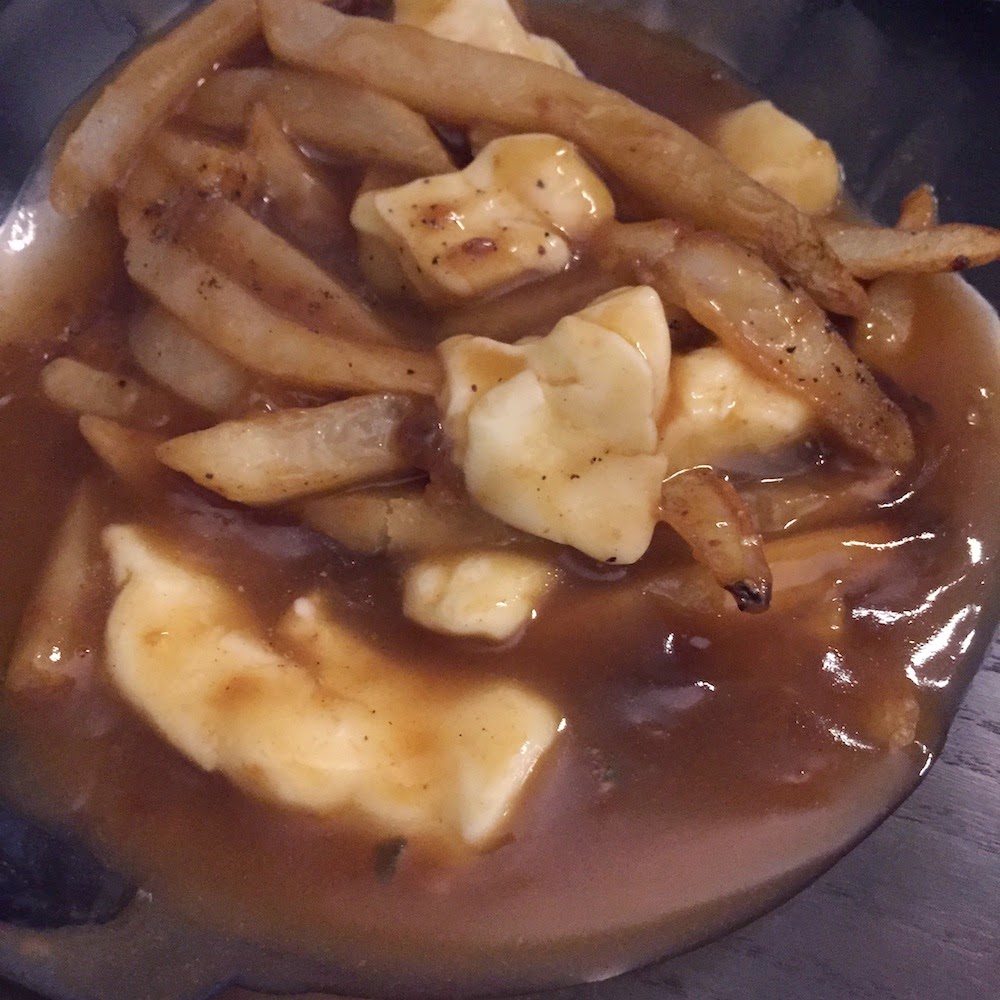