Dave and I have finally made it to Europe. We planned this trip in less than two months (again, Dave gets all the credit in planning). I took care of the hotel in Amsterdam (courtesy of Citizen M) and that is about it. It's our fourth day here in Amsterdam and we leave tomorrow for one evening in Milan and then to Switzerland for 5 days! We are then off to Paris for 7 days and then back home! Dave booked some apartments for Milan and Switzerland and in Paris, we will be staying at a friend's for one night and the rest at fancy Hyatt hotels around town (courtesy of our Hyatt credit card).

Amsterdam has been great but cloudy, rainy and cold. I had to buy a blanket to keep extra warm and Dave reluctantly bought a souvenir hat (although he loves how his head is super warm!). We're a bit worried about Switzerland now where temperatures in Zermatt are hovering around sub freezing temperature.

We managed to meet up with a couple of friends and even randomly bumped into Dave's coworker! We have stayed mostly in the city but today, we borrowed bikes from the hotel, took a train and rode around Weesp all day. I haven't been on a bike for a while so now my butt is super sore. Dave's souvenir hat became my butt mat and it was great.

We tried most of the recommended dutch delicacies such as the Flemish fries (at Vleminckx Sausmeesters), smoked herring and stroopwafel (both at the Albert Cuyptmarkt). We didn't do the croquettes nor pancakes. What we did try is lots of Asian food. The city is filled with Thai, Indonesian and Chinese cuisine. We tried two thai restaurants (delicious noodle soup at Sawaddee Ka) and a Surinamese one in some hip neighborhood which we wouldn't recommend. All the dutch restaurants we tried have been misses. I'll try to blog about some of them later!

I didn't bring my laptop on this trip so here are a couple of pictures from my phone. Here is one of us on a cold rainy day by one of the many canals in the city. My blanket cost $49.50 Euros. It's made in Italy and only 20% wool but has served me well. 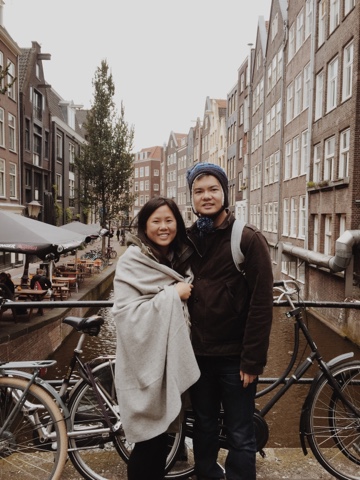