We have been back for two weeks now from Europe but it feels like so far away already. Work was slow in the beginning but has now picked right back up but it's been a good kind of busy. I also make sure to keep myself busy outside of work. I try to swim at least twice a week and add a Vixen workout from time to time. I'm going to add yoga back into my life starting this Sunday. I'm also going to be covering more sample sales in October (that takes care of shopping). And just a couple of days ago, I signed up as a zombie dancer for the NYC Greenwich Halloween parade! For not being much of a Halloween person, this is tops for me. October is going to be a busy one!Anyway, when I come back home from any type of trip, I like to look at my shopping loot and reflect upon what I love most and what I definitely wasted my money on.


I had imagined a bigger haul from Paris but due to unforeseen circumstances (stolen backpack), shopping wasn't as crazy as I imagined it would be for me in Paris. After losing cash and passports and all the money spent to get everything back, I wasn't in the mood to spend a whole lot more.  I had saved all my shopping energy for Paris too even though I could have shopped throughout our trip. There was so many great shops in Amsterdam especially for home goods but since it was our first stop and the idea of dragging things around seem daunting (especially for husband who carried most of everything) made me decide that Paris would be my final and only shopping destination.

Switzerland was basically a dry land for shopping and full of tourist crap and of course everything was just so, so expensive. Didn't buy a single thing there except for a souvenir pin and magnet which were also gone along with my backpack. At least I got one postcard out of that country and some meringue from Gruyeres Village. Oh oops, I forgot to mention the large amount of chocolate bars we exported including this large Toblerone bar which we have yet to dent!

Despite my underwhelming shopping experience in Paris, I didn't come back empty-handed.While aimlessly walking around in Paris one day, I Foursquared what was around the area and decided to check out a department store called 'Galeries Lafayette' which I have never heard of (but probably did). I had no idea it was THE shopping haven for locals and tourists. Tourists for sure. There were bus loads of tourists (mostly Chinese) and there were all lined up at all the luxury brand shops and I was so confused. There are Chanel, LV, Fendi, Longchamp stores basically everywhere in Paris but why are they all lined up here? I even asked the sales staff if the handbags were cheaper here but the simple answer was, these tourists shop where they are dropped off.

After three days in Paris doing no shopping at all, I was determined to buy something and take advantage of my 12% tax refunds on my purchases. Well, all I got that day was...nothing. That's nothing for myself only. I did get my mom a Longchamp Pliage bag ONLY because I saw all the lines in the stores and decided to be part of the action. When I found out the bag was only about $80 USD after tax refund compared to $145 in the USD, I decided to wait in line also. It went rather quickly. The staff moved so efficiently and knew a bit of Chinese too to help the tourists out. So I got my mom this damn bag she probably won't end up using. So why did I get it? I don't know why but I did and I "saved" some money doing it! Oh and it is her birthday coming up and I always get her something red anyway. I got a red bag like this one. I am actually not 100% sure what size I got. 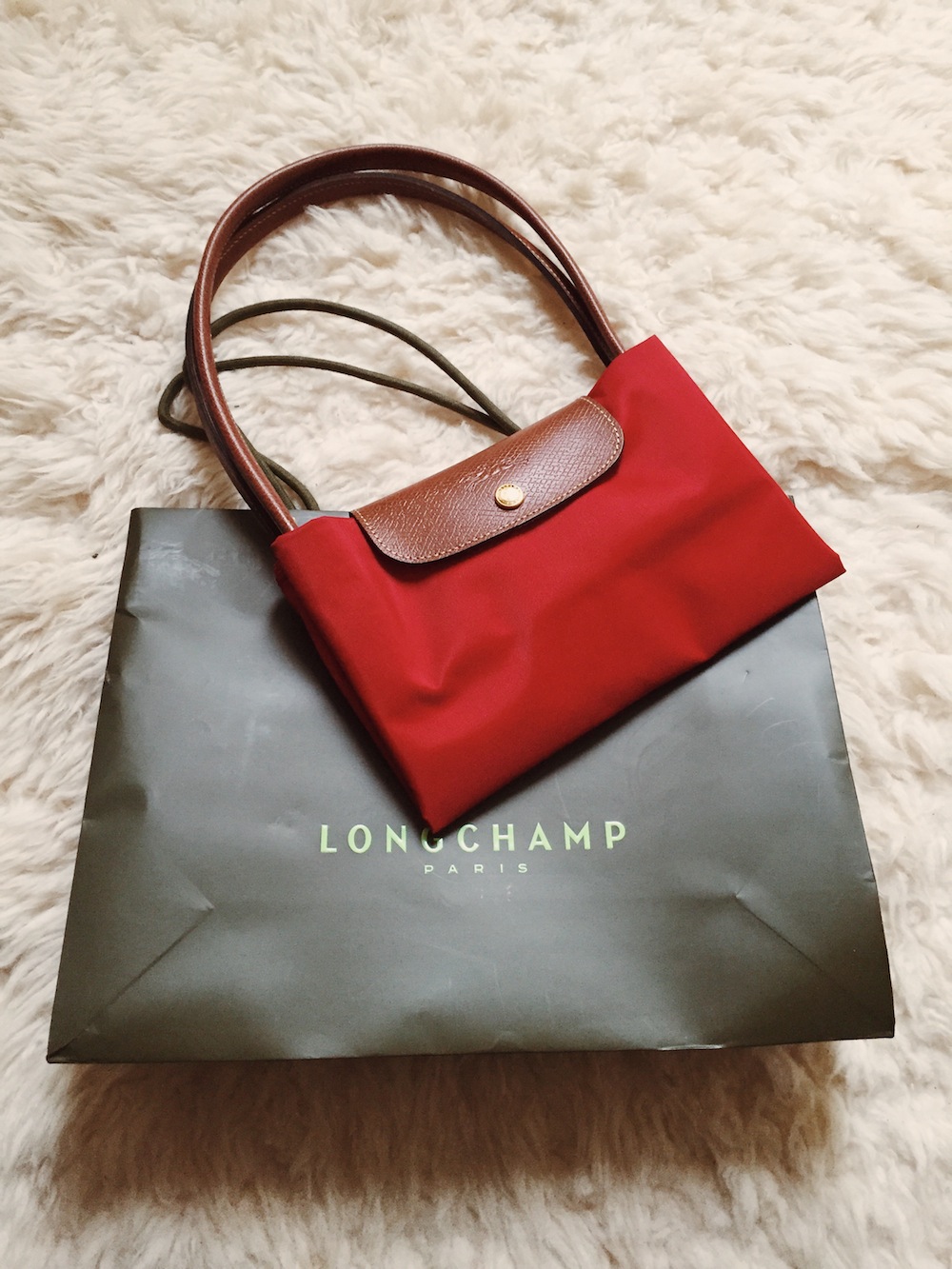 When I started researching what to buy in Paris, there were a lot of posts about Paris' pharmacies and how great they are. I knew this from before and I knew that I would be dropping a lot of money in these pharmacies. I visited a few of them including City Pharma and Pharmacie de la Place Republique and spent over 200€ on pharmacy stuff...I did go a bit overboard. Sadly, all of these won't make me any prettier.

I knew essentially I wanted Argan oil, lotions and milk cleanser. Buuuut, I got just a tad more. Since I also had some of my daily essentials in my stolen backpack, I had a few things to replenish like my Clarins lipbalm which was a lot cheaper (Note: buy this at the Duty free shop for even cheaper! 13.50 € vs 17.50€). Most of the brands I got, I can also find here but essentially, everything is just a bit cheaper especially the Laroche Posay stuff. I got creams for my mommy too. I shipped her a care package including all the Paris goods the other day and spent over $40 on shipping. So in the end, all the savings balanced out :( 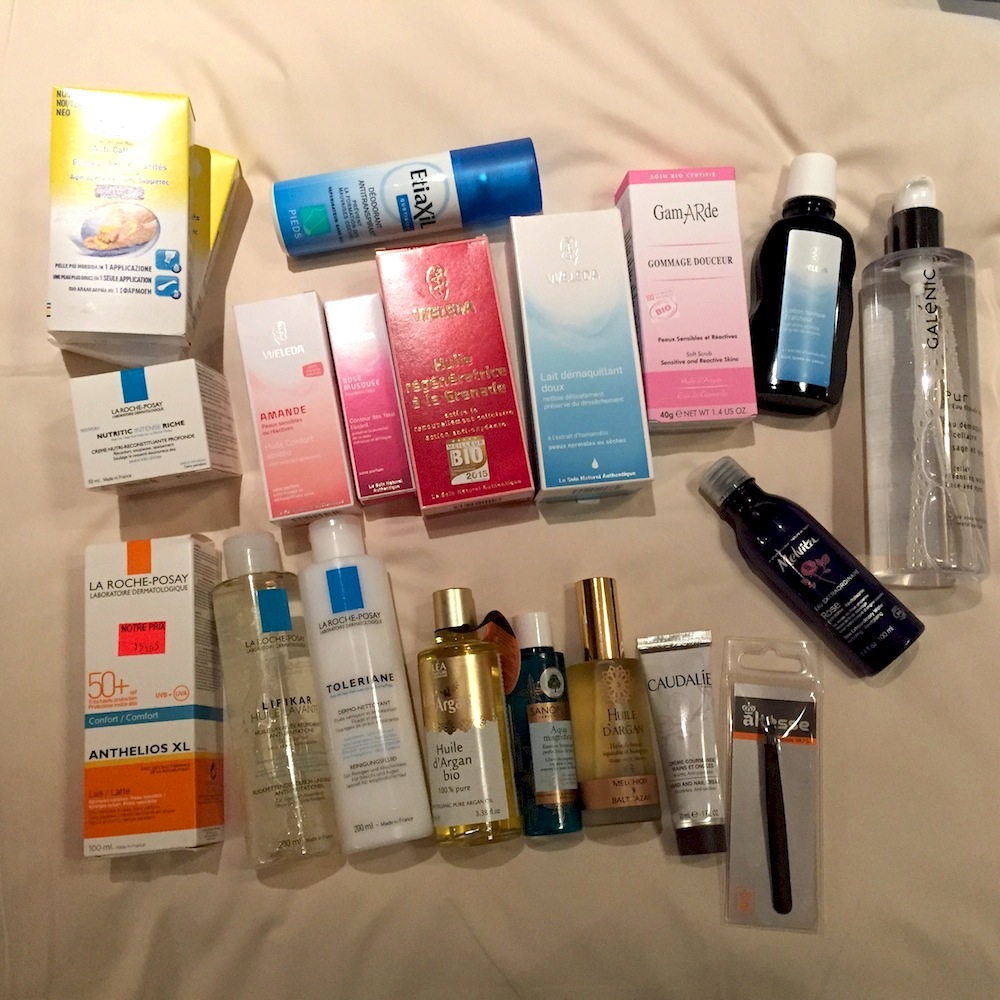 Next on my shopping itinerary was to get a pair of flats from Repetto which I had heard good things about. There was a flagship store on the same black as our hotel which I didn't even end up going to. I decided to visit all the stores around our hotel near Place Vendome. Nothing affordable for sure. I went to the usual suspects like Colette, Maison Kitsuné, Comme des Garçons and more, and then I stumbled into a Pretty Ballerinas which I've also heard about (My friend here owns like 4 pairs and swears by them!). I decided to take a look and after an hour of trying on a mountain of shoes, I walked out with these pair of 'Shirley' with chains. They felt so good in the store that I wanted to get two but the price stopped me. Update: I did wear them to work the other day but one of the shoe is starting to rub on my right heel so I guess I have to wear them in which I thought was not necessary. Sighs.

I had to throw in a bar of soap so I can reach the 175 € threshold in order to get my tax refund. That explains the soap. These would be my biggest splurge so far on flats and I hope they last. I couldn't find the same model on the US website to compare but similar models cost about $259 USD. They cost me about 150€ with tax refund.

Finally, while walking around Canal St Martin on one of our last days in Paris, I stumbled upon a small jewelry shop and a necklace caught my eye. I went right in to try it on and decided I would sit on it. But after eating and still thinking about it, I decided to go back for it. I also thought this would be my one keepsake from Paris. No souvenir tshirt, keychain, Eiffel tower statue..just a silver necklace by Desidero. The designer herself Guilia was there to explain how she came about designing the 'Sunset' necklace I bought. Turns out, she had the intention of making flower petals but landed and stuck with this shape instead. 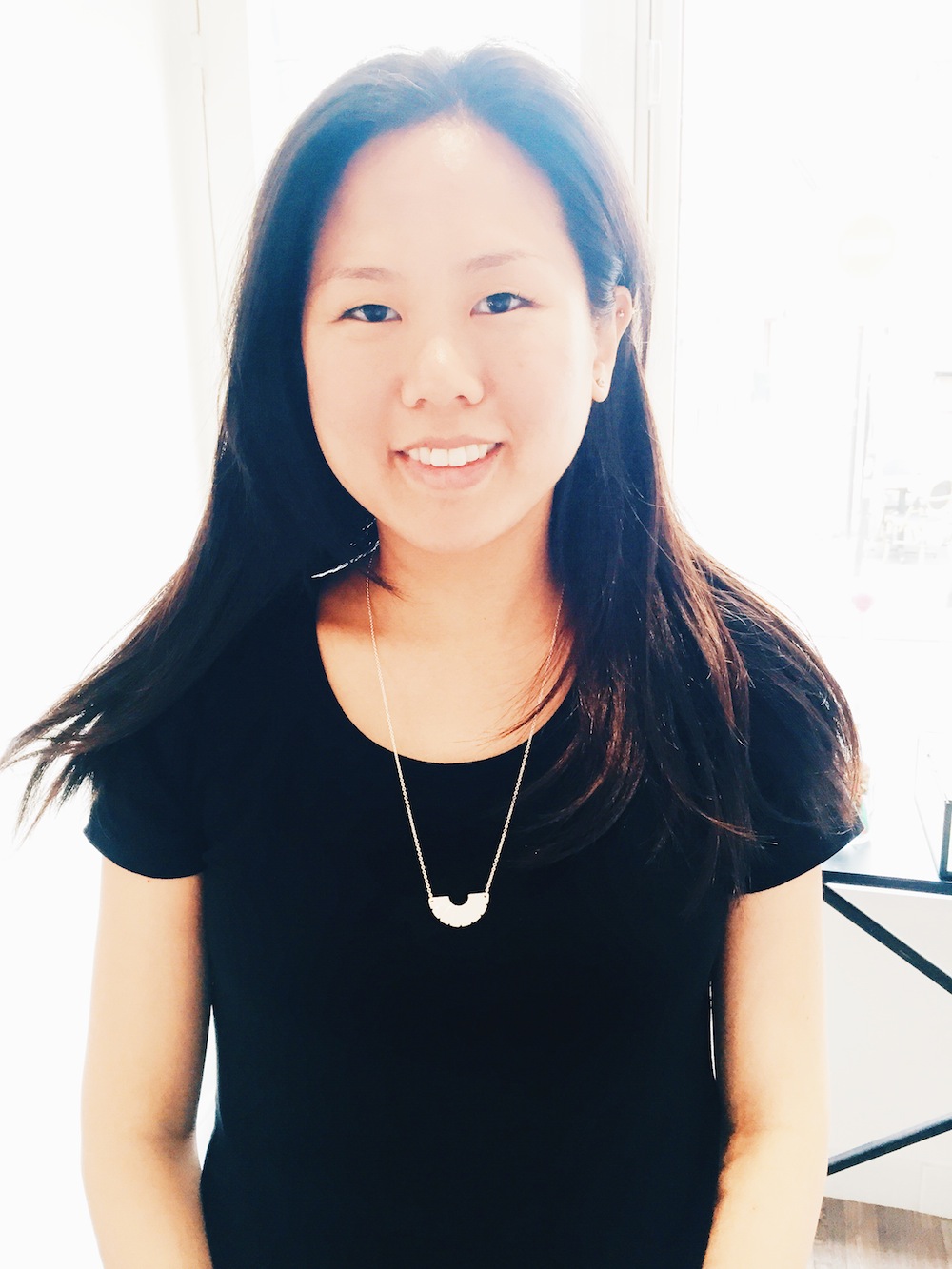 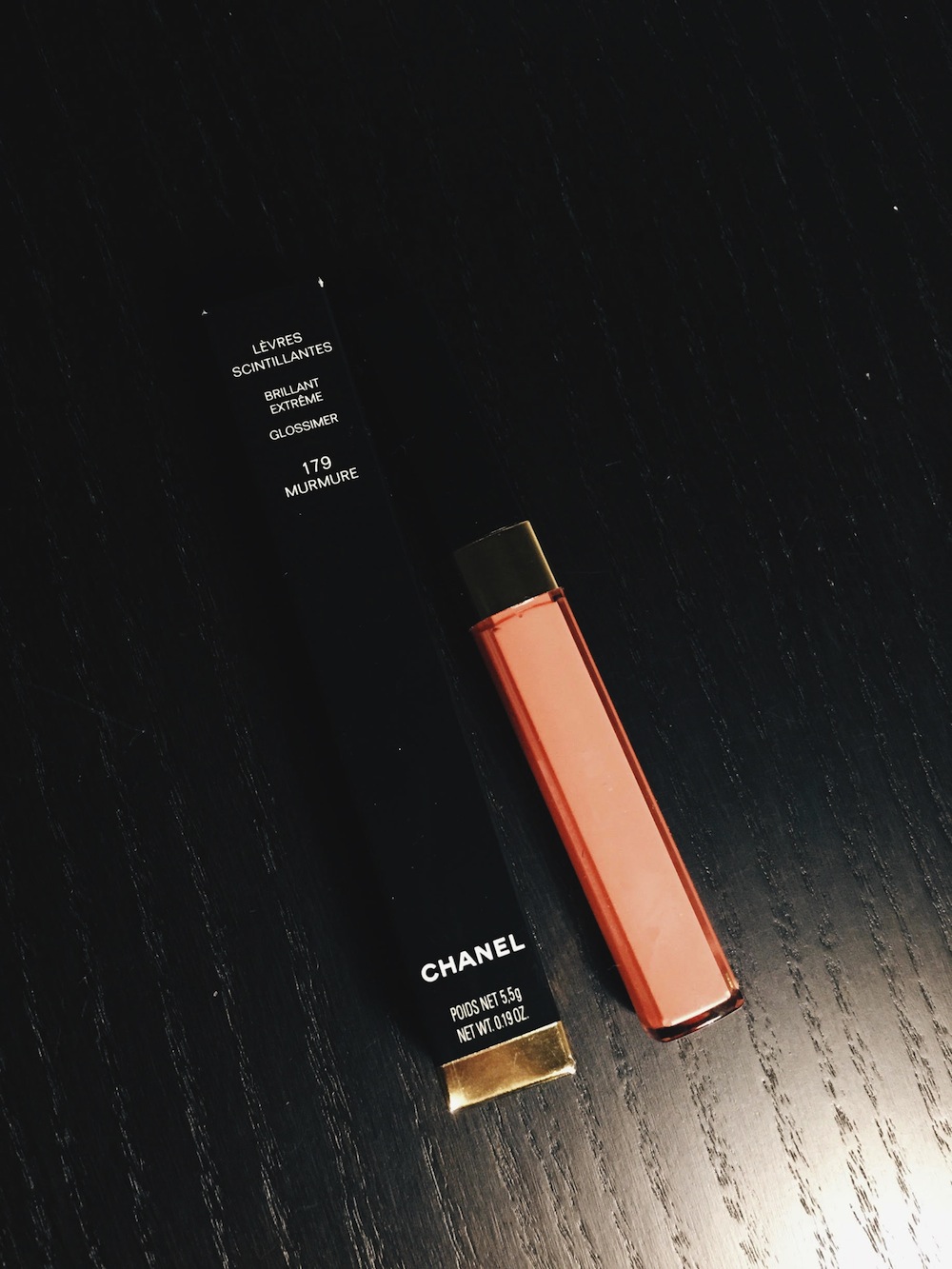 So in the end, I guess I don't regret any of my purchases except maybe I could have laid off on the pharmacy stuff. I didn't buy any clothes at all but I can get my French parisien fashion fix at the Maje and Sandro sample sale coming up in the next two weeks in NY! Probably at cheaper prices than in Paris because did you know that there are never sales in Paris except twice a year during Summer and Winter? Shopping in NY is still the best!