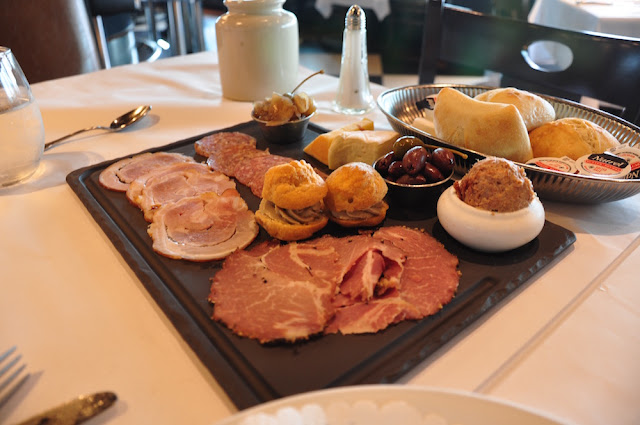 Back in July, Dave and I drove up to Montreal to visit friends and family. There, we introduced S to everyone and took millions of pictures. I was afraid visiting so many people would take a toll on us but we managed fine day by day and S was such a trooper. In the middle of it all, we planned a little getaway to Québec city with my sister. Only a 3 hour drive from Montreal and spending three days there seem more than enough to enjoy the city. We would eat and play as we pleased. I haven't been back to Québec city since my collegiate days so it's really nice to go back to revisit it as an "adult". We did everything minus all the tourist spots. Well, we meant to be tourists but other things got in the way like rain and hunger. We did spend a day in Île d'Orléans (a short drive from Québec city) which I have never visited before. We also visited the "hip" areas of Québec city that only Dave could find.

I tried to find a more picturesque intro photo of Québec but I realize that all we did was just eat and didn't really do much sightseeing! So yea, we skipped Chute Montmorency (we intended to go but when we drove right past it and decided that we didn't really need to go) and totally forgot about Petit Champlain which I was looking forward to. We did walk around Place d'Youville and saw Château Frontenac from far away.

Our first stop was lunch at Le cafe du monde. The drive wasn't too long and we were all hungry. A friend's friend recommended this place for us and says there's a nice view of the river. Food was good and a bit pricy and the view was okay haha. Anyway, we tried several things on the menu and we were just happy to be fueled. 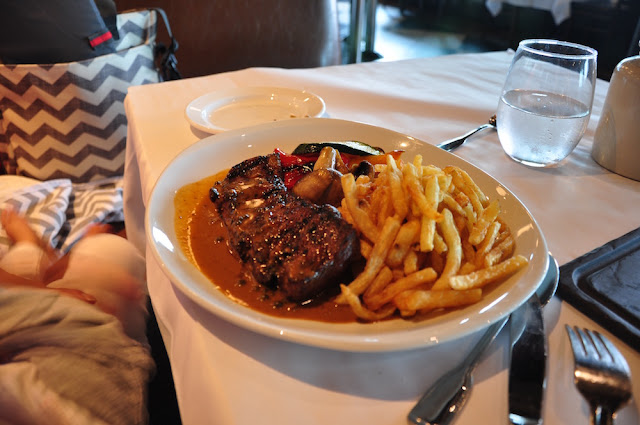 Next stop is coffee. Dave found this coffee shop called 'Cantook' and it was so good we went back again before leaving the city. 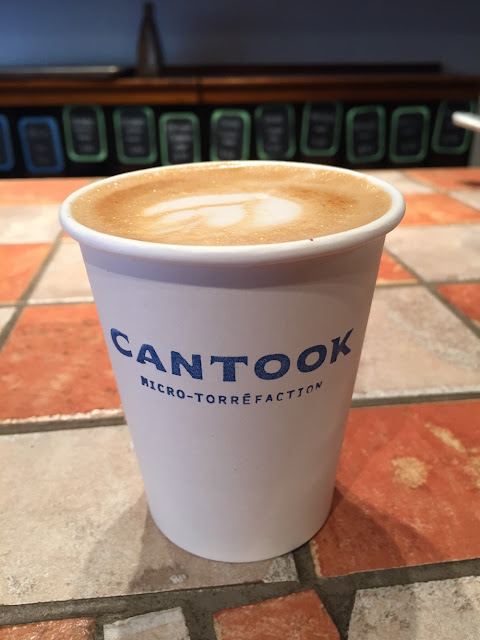 We visited J.A. Moisan. The oldest grocery store in North America. We picked up some canned good here. Not like Spam or anything but canned ducks and pork! 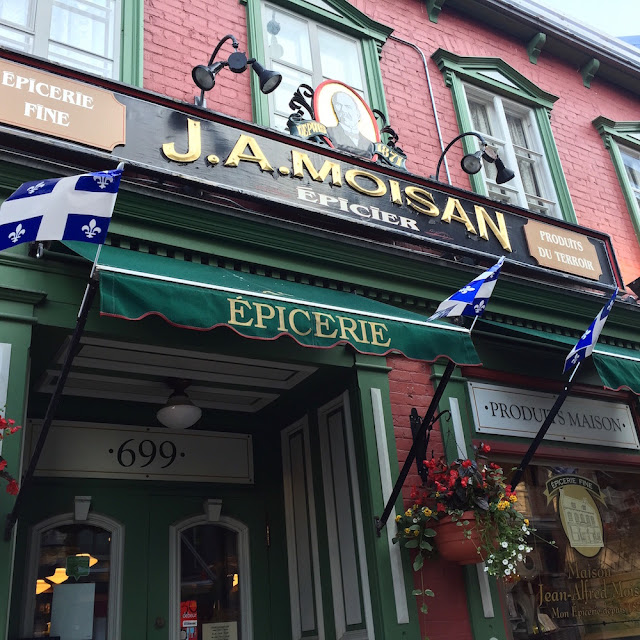 Dinner at L'entrecôte Saint-Jean where their speciality is steak and gravy. We had a late lunch and weren't that hungry but needed dinner before going back to our apartment. My sister and I opted for salad and Dave got the popular steak but in a wee size. 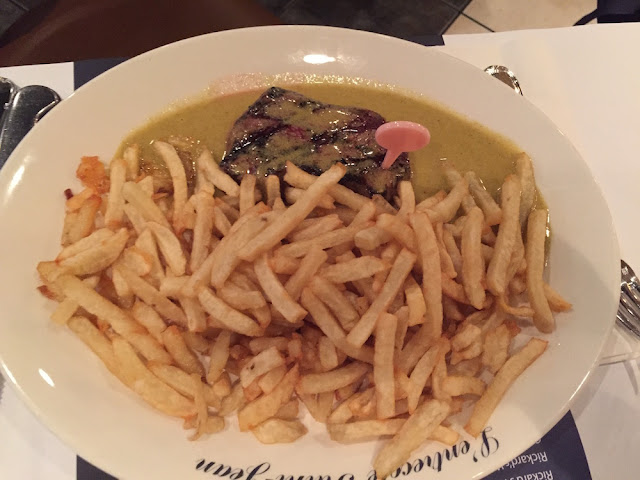 Day 2, we did our day trip to Île d'Orléans: 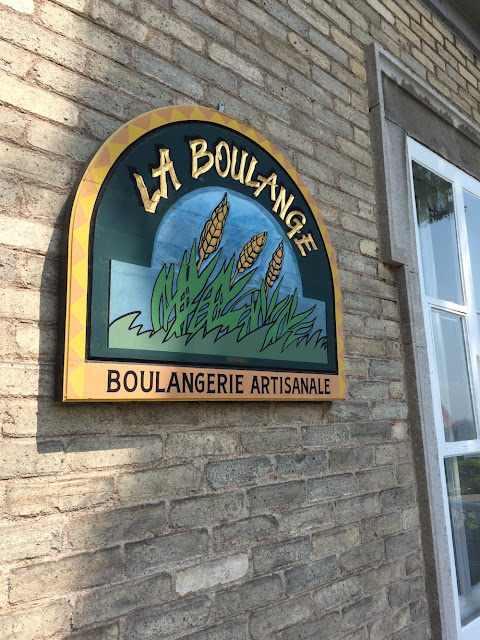 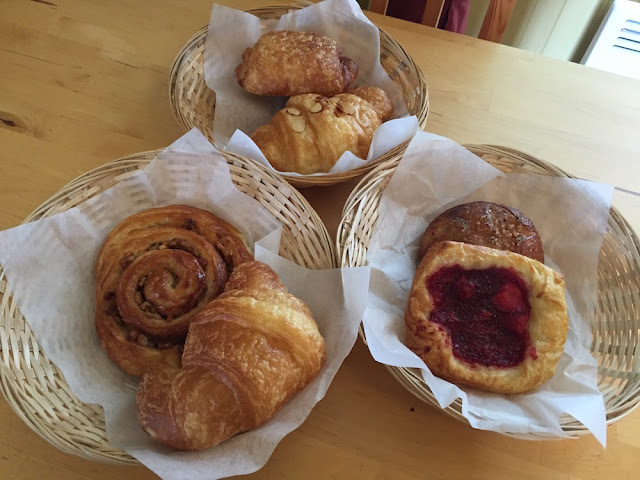 Behind the bakery, there was a shop that sold local artisanal goods. Good for gifts and souvenirs. 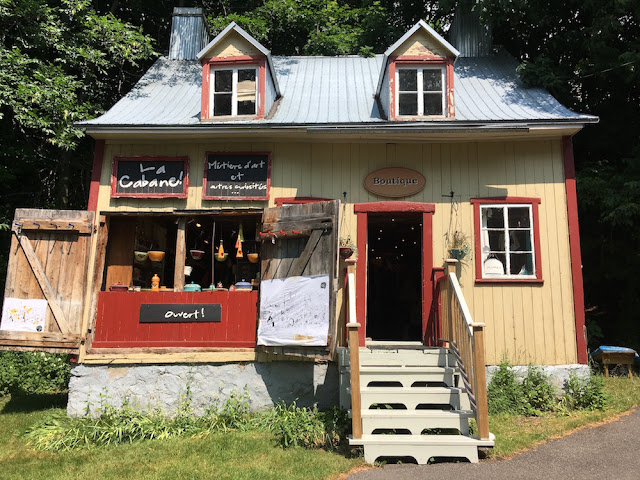 These rillettes are sooooo good! If they were not $15 each, I would have bought a dozen. It's so greasy and tasty. These also do not have preservatives AND we are told the ducks are not force-fed to give them fatty liver. I wonder how they made them fat then... french fries for breakfast? 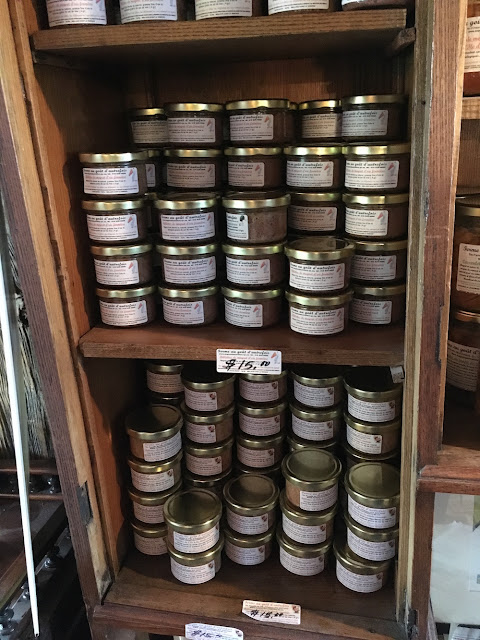 We received a map of the island with different destinations marked. Our plan that day was La Boulange and the duck farm. After that, we randomly picked things from the map. We did a quick stop into Fromages de l'isle d'Orleans. We planned to be out for a while so didn't bother buying any cheese. I did try their infamous Paillason which they claim is the first cheese made in America?? We tried it grilled. A small piece for a buck. We were thirsty and got a 'lait frappé' aka milk shake. Do not get this! It's literally just shaken milk with blueberries instead of what we thought was like milkshake with ice cream and all the good stuff. We were pretty upset over it since we spent $5 on this tiny little cup haha. We hate spending money on crap. So unhappy I didn't even take a picture.

The staff was also dressed up in old timey clothes which was lame but I get how it's appealing to tourists ;p 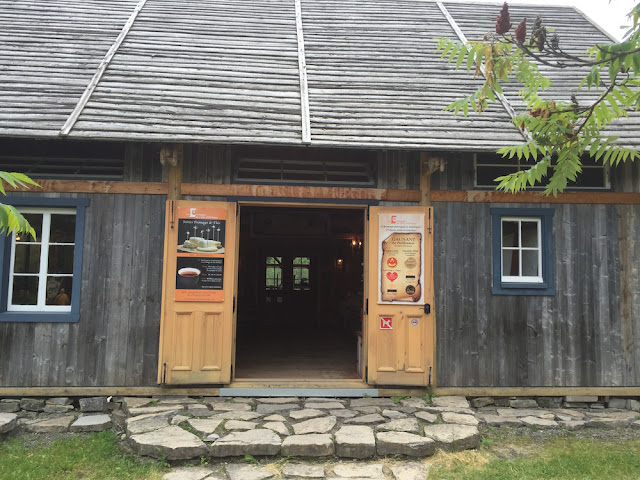 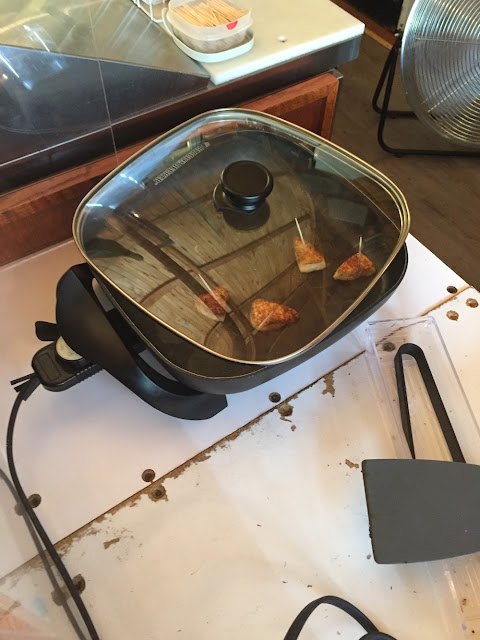 Next stop was 'La roulotte du Coin'. This was a nice find. Again, we weren't very hungry but just had to try something. They ran out of foie gras poutine but was able to deliver an excellent foie gras grilled cheese sandwich. So we took what we can and enjoyed it under tree shades while watching some geese/ducks. 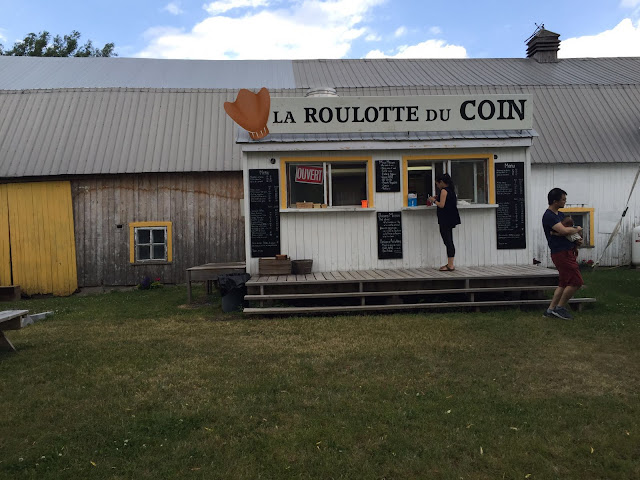 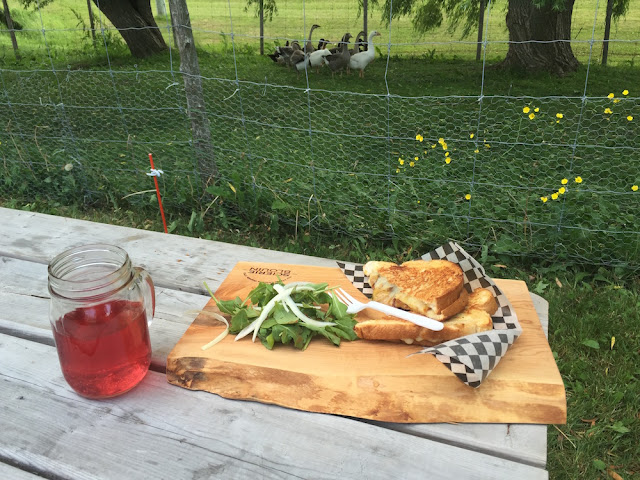 A shop behind the roulotte sold duck products like duck grease for your bike chains! 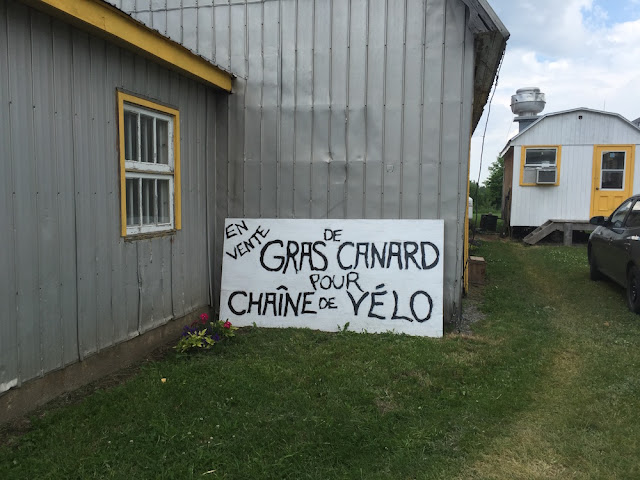 Back into the city, we got poutine from Chez Gaston. Must ingest as much poutine as we can while in Quebec. 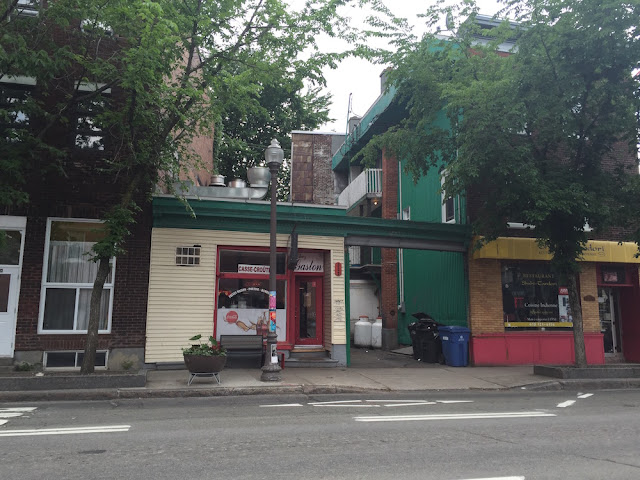 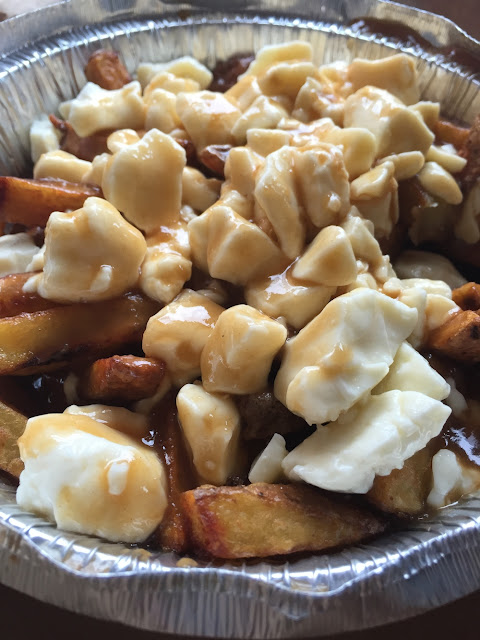 For dinner plans, we had two spots we wanted to try in Quebec's new hippidy spots. Patente et Machin and L'affaire est Ketchup. We explored a little bit of the area first and visited some shops here and there before dropping in L'affaire est Ketchup. We were an hour early before opening and were told to check out Patente first since they opened earlier. They said we can reserve too for that evening but since we didn't know how our stomach would handle two places, we didn't do it. Which I would later regret. We go into Patente which was empty and decided on the spot that we would order appetizers here and then go to Ketchup for the main courses. 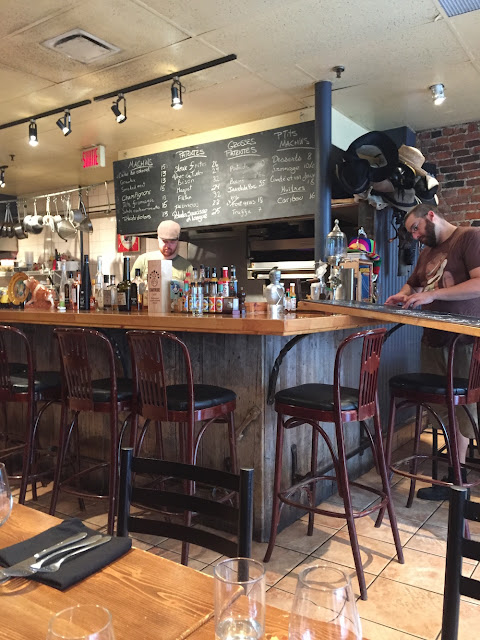 Sister was craving oysters so we got some oysters. 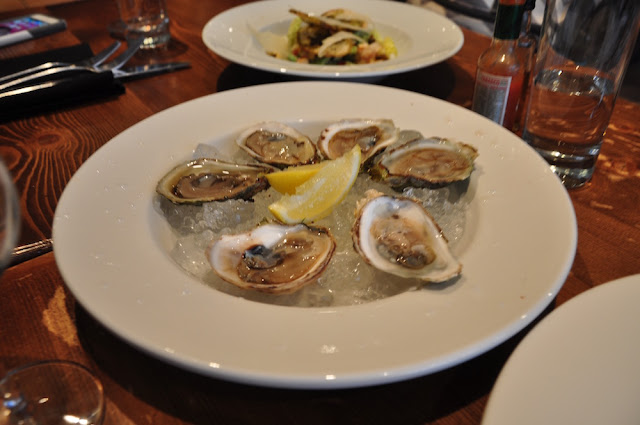 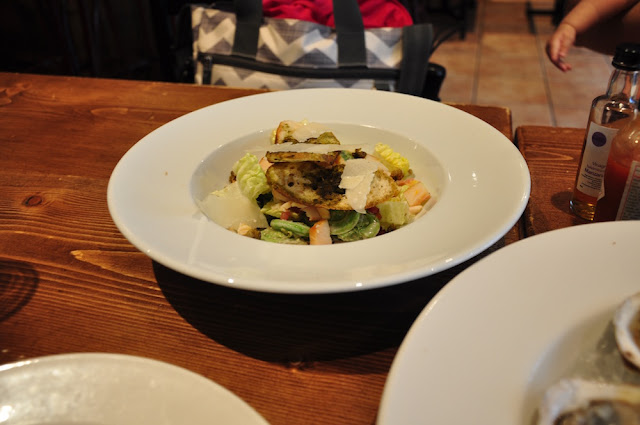 At 6:15 on the dot, 15 minutes after opening, we arrived back at Ketchup and it was already packed. No more place for walk-ins. We were bummed. I took a picture of the menu to see what we were missing. 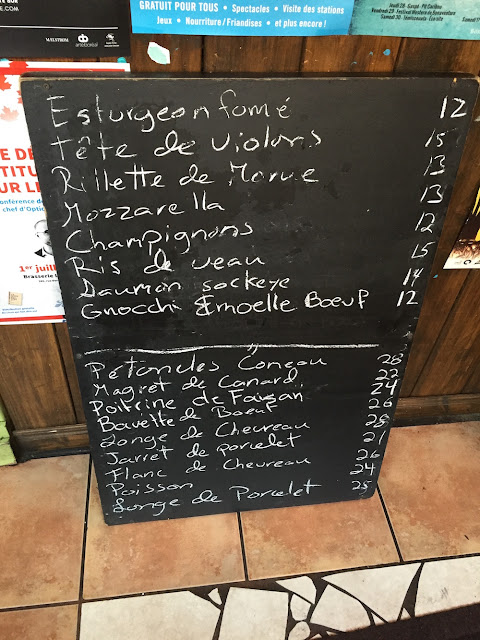 Well, nothing something sweet can't solve our dissapointment. A trip to Chocolat Favoris for some choco-dipped ice cream.
A buffet of chocolate to pick from. 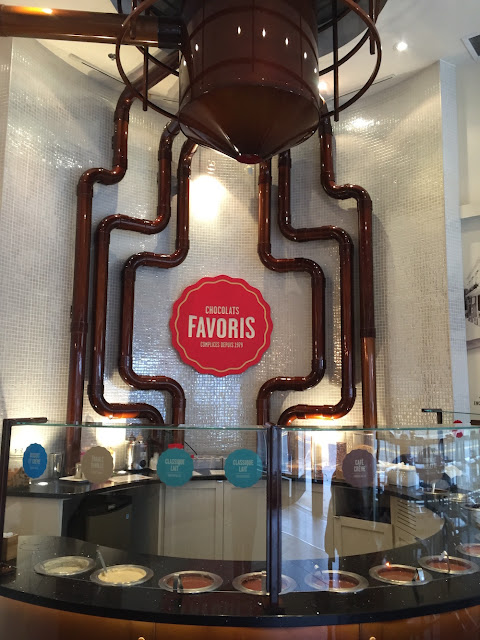 We needed food so we went back to J.A. Moisan to pick up some snacks for the evening. Crackers with Quebec pâtés, cheese and sausages.

This is the kind of stuff that makes me HAPPY. And strawberries from Île d'Orléans! 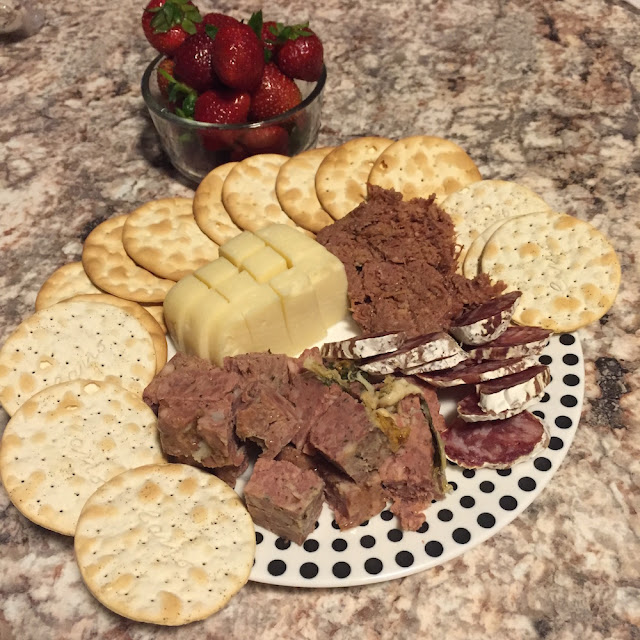 And voilà! This concludes our trip. The next day, our plan was to visit the Montmorency waterfalls which we drove right by without knowing and then Petit Champlain which we did not end up doing because of rain. So, we went to Marché du Vieux Port de Quebec where we ate before heading back to Montreal.  We bought fresh pasta for dinner back home. We also bought some foie gras we sampled!

And on our way out, we got a large poutine from a popular Quebec city chain Chez Ashton. Lots of squeaky cheese goodness. 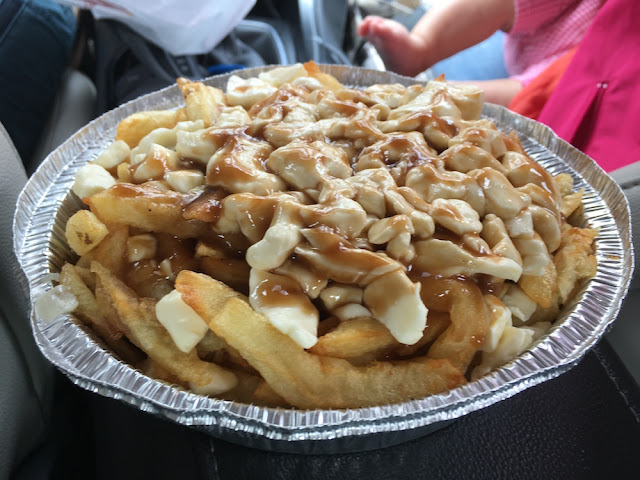 And finally, all the canned stuff we bought! I forgot to include the delicious rillettes I mentioned in the post. 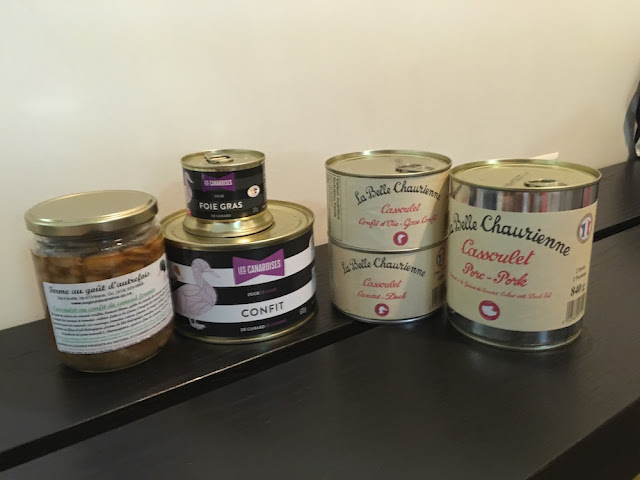